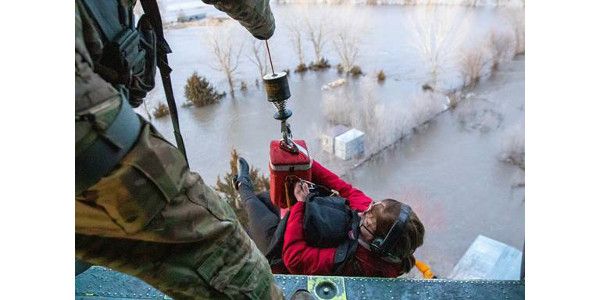 The Nebraska National Guard conducts an airlift rescue mission during the March floods. (Courtesy of Office of Governor Pete Ricketts)

Earlier this year, the Governor and First Lady launched an initiative to recognize Nebraskans who displayed extraordinary courage and compassion while helping their neighbors and communities recover from this year’s floods. Nominations are still being accepted until the October 1st deadline.

“The blizzards and floods this spring, and repeated rounds of flooding over the summer, adversely impacted thousands of Nebraskans,” said Gov. Ricketts. “But the severe weather didn’t sink us. We rallied together as a state and rose above it. Susanne and I want to acknowledge the selfless Nebraskans who stepped in to help their neighbors during the disaster. We encourage you to share the story of their heroism with us.”

Flood hero (#FloodHero) nominations are currently under review and honorees will be selected and receive recognition later this year.

In March, blizzards in Nebraska, followed by heavy rainstorms and rapid snowmelt, caused severe flooding in much of the state. Due to the impacts of the extreme weather, 81 counties and 104 cities throughout Nebraska issued disaster declarations. Even after the water receded, many rivers continued to be at flood stage and the ground remained saturated in much of the state. For these reasons, summer rainstorms caused additional flooding across Nebraska.

Funding still available for a second round of ODAP payment
June 22, 2022