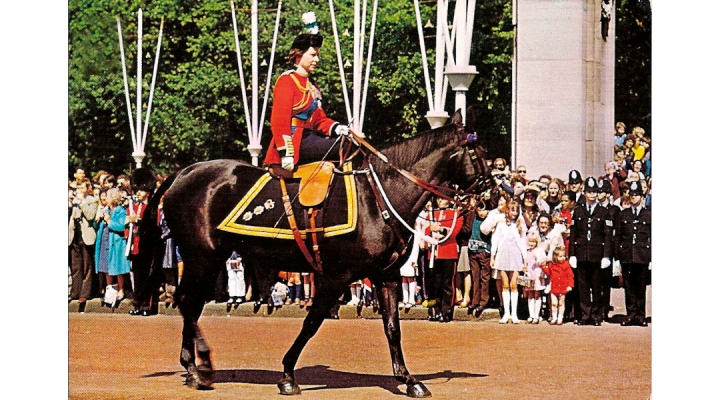 Queen Elizabeth II riding her famous horse "Burmese," given to her by the Royal Canadian Mounted Police in 1969. Burmese was ridden by the Queen at every Trooping the Colour ceremony from 1969 to 1986. (Photo: Leonard Bentley, Flickr/Creative Commons)

GREENWICH, N.Y. — On September 8, 2022, Queen Elizabeth II of the United Kingdom passed away at the age of 96. She ruled on the throne for 70 years with devotion and constancy amidst all kinds of successes, tragedies, scandals, and joys. One of the Queen’s endearing features was her love of animals, particularly for dogs and horses. Her love of the latter was not just a hobby, but a horse racing enterprise she took seriously. This enterprise brought her to the United States several times during her life to visit Kentucky horse farms.

Queen Elizabeth was born April 21, 1926 and her passion for horses began at an early age. She learned to ride at age four on a Shetland pony named Peggy. From then on, her interest in horses only grew and she began attending horse races with her parents in her teens. When her father, King George VI passed away in 1952 Elizabeth inherited the Royal Stud, a horserace breeding center on the royal family’s Sandringham estate.1 She continued the center’s breeding activities and it produced many winners for her throughout the years.

Elizabeth’s pursuit of improvement for her stable’s racehorses eventually led her to the Kentucky Bluegrass, an area known worldwide for its Thoroughbred horses. British horse races are more often run on turf, are longer in distance, and some incorporate steeplechases as well. British horses are typically bred for endurance, rather than speed, to compete in these types of races. Meanwhile American race horses are typically bred for speed to compete on the shorter dirt track races featured in the United States. Wanting some faster horses in her stables, Elizabeth looked to Kentucky to breed some of her mares with speedy American horses. She first went to Kentucky in 1984 to attend the inaugural Queen Elizabeth II Challenge Cup at Keeneland, a race which is still run today. It was this year that she brought one of her mares to Lexington and the following year her stable’s first “American” foal was born.2

Located in Versailles, Kentucky, Lane’s End Farm was (and still is) a highly successful Thoroughbred farm operated by William Farish III and his wife, Sarah. At the recommendation of her racing manager the Queen began boarding mares at the farm for breeding. In her lifetime she would make five trips to Kentucky between 1984 and 2007.3 Several of these trips were labeled “private vacations” or “working vacations” and she spent these trips visiting and working with her horses, touring horse farms, and examining stallions for breeding potential with her mares. Farish would later become Ambassador to the United Kingdom during part of George W. Bush’s presidency and he and the Queen probably talked a great deal about horses in between matters of state.4

Queen Elizabeth had a reputation for being a keen horsewoman. She was an excellent rider as it was an activity she did frequently, particularly when at the family’s country estates like Balmoral or Sandringham. She performed certain royal functions on horseback in her younger years, and would sometimes ride with leaders she met with, like she did with President Ronald Reagan at Windsor Castle in 1982.

She was interested in the development and nature of horses. Trainers and breeders that worked with or met her were often impressed with how much she knew and the detailed questions she would ask them. For example, Elizabeth knew to not wear any perfume when visiting a barn because the scent could excite the colts.5 Similarly, on a visit to Hermitage Farm in Goshen, KY in 1986, farm member Bill Landes was tasked with planning the visit and giving the Queen a tour. He remembered being nervous about details like ‘whether the horses would behave for her,’ and ‘which horses he should show her.’ However, Elizabeth was soon asking all kinds of questions and was inspecting the horses’ shoes while Mr. Landes was giving her the tour. He soon realized he was with an experienced horsewoman and need not worry about those details.6

Elizabeth seemed to enjoy all aspects of being a horse owner. Riding was an essential part of the English “country life” she adored and perhaps would have lived full-time if she had not been a queen. Horses offered the Queen a diversion from the duties and pressures of her station. She also possibly did not seem to mind the dirtier parts of horsemanship as she reportedly remarked to a trainer while visiting a stable once, “It is nice to come to a place that doesn’t smell of fresh paint.”7 This enjoyment of horses is something she passed on to other members of her family. King Charles was a polo player, and Princess Anne and granddaughter Zara Tindall both competed for Great Britain at the Olympics in equestrian events.

On her final visit to Kentucky in 2007 the Queen and Prince Philip attended the Kentucky Derby and took in “The most exciting two minutes in sports.” Street Sense was the winning horse that year. It took seven months of planning for Churchill Downs to host her, but all went well. In an event that is usually quite star-studded, Elizabeth was the most famous person there that year.8

Over the course of her life the Queen’s horses racked up more than 1,800 victories. Elizabeth’s position often required her to be refined, regal, and stoic, however watching horse races were moments when the queen would let her guard down and show some emotion as she cheered, encouraged, or chastened her horses from the stands. She beamed with excitement when her horse Estimate won the Gold Cup (the first leg of the British Stayer’s Triple Crown) in 2013, one of her biggest wins.9

Some say that Kentucky was Queen Elizabeth’s favorite place in the United States, liking the atmosphere and the time spent with horses on each visit. Queen Elizabeth remained a rider up to the end as she reportedly was still riding ponies as late as earlier this year. Perhaps some of her Kentucky-bred “American” horses will help carry on her legacy and win some more races in honor of her majesty.