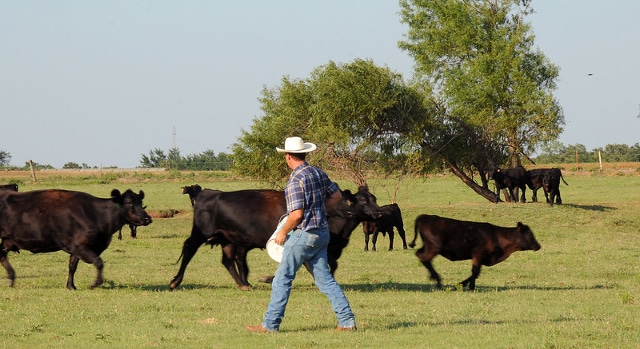 There are more than 800,000 ranchers and cattle producers in the United States, making it the world's largest beef producer. Those farmers and ranchers produce 18% of the world's beef with only 8% of the world's cattle. (U.S. Department of Agriculture, Public Domain)

ARDMORE, Okla. — Beef is a staple of American mealtime. Producing beef requires the dedication of farmers and ranchers across the United States, and proper management of grazing animals can rebuild the health of pastures and rangelands and provides food and essential products for society.

Since 1945, Noble Research Institute has supported farmers and ranchers in fostering land stewardship, improving the soil and producing one of the world’s favorite foods. In honor of Noble’s 75th anniversary, Noble is sharing 75 fun facts about beef. Below are some of those facts.

Throughout the State and Around the World

On the Dinner Plate

Every day, 76 million Americans eat beef. Beef is one of the most important dietary sources of iron. One person would have to eat three cups of raw spinach in order to get the same amount of iron in one 3-ounce serving of beef. It is also a source for other nutrients our bodies need, including protein, B vitamins, zinc, selenium, niacin, phosphorous, riboflavin and choline.

The hamburger was popularized at the 1904 World’s Fair in St. Louis. A hamburger only cost 5 cents in 1921 and 12 cents in 1950. The first hamburger chain was White Castle, which was founded in Wichita, Kansas, in 1921. The most popular beef products include ground beef, ribeye steak, strip steak and T-bone steak.

More than 98% of a beef animal is used. About 60% of a beef animal goes to make products other than meat, such as medical products like insulin and drugs used to help the body accept organ transplants. One cowhide can make 18 soccer balls or 20 footballs. Gummy bears, marshmallows, candles and paintbrushes, amongst other things, are also made from cattle.

Today’s beef producers use 33% fewer cattle to produce the same amount of beef that they did in the 1970s. The industry uses natural resources much more efficiently today and represents only 2% of U.S. greenhouse gas emissions. The carbon footprint of a unit of beef produced decreased by 16% and water use decreased by 14% from 1997 to 2007. The U.S. beef industry continued to reduce water by 3% from 2005 to 2011.

It takes 2,000 years for natural processes to make 10 centimeters of fertile soil. That’s why it’s so important to protect the soil from erosion and other degradation. Ranchers are building up – not just conserving – the soil on pastures and rangelands by following five basic soil health principles within the context of a properly managed production system: 1) cover the soil, 2) minimize soil disturbance, 3) practice plant diversity, 4) maintain continuous living plants/roots and 5) integrate livestock.

Healthy soil with high levels of organic matter can store 20 times its weight in water, according to the FAO. Increased water-holding capacity helps reduce the need to use water for irrigation and improves the land’s resiliency in drought.

Grazing lands sequester about 30% of Earth’s carbon pool, according to Global Change Biology publication. Increasing soil organic matter in pastures and rangelands will help reduce atmospheric carbon dioxide. By creating natural reservoirs that can hold carbon, we can reduce the greenhouse effect and slow atmospheric warming.

All cattle spend most of their lives eating grasses and other forages on grazing lands acquiring the nutrients needed to produce healthy beef. There are 655 million acres of pasture and rangeland in the United States, making it the single largest land use in the country. About 85% of the grazing lands are unsuitable for producing crops.

Rangelands naturally evolved with the presence of fire and grazing, making them processes that the land continues to need today. Cattle and wildlife can be compatible with proper management on native rangelands. More than half of farmers intentionally provide habitat for wildlife.

Check out Noble’s 75 Facts About Beef blog article to read the full list. Follow Noble Research Institute on social media and join in on the anniversary celebrations.