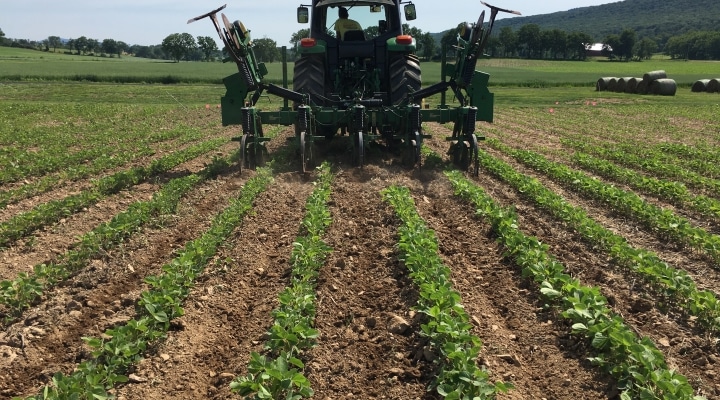 This high-residue cultivator was used in the research to control weeds between the soybean rows in the reduced herbicide treatment fields to eliminate an herbicide application after the crop and inter-row weeds had emerged. (photos by Heather Karsten/Penn State)

UNIVERSITY PARK, Pa. — Farmers using no-till production — in which soil never or rarely is plowed or disturbed — can reduce herbicide use and still maintain crop yields by implementing integrated weed-management methods, according to a new study conducted by Penn State researchers.

While no-till agriculture can conserve soil and energy, it relies primarily on herbicides for weed control and to terminate cover crops and perennial crops, noted the study’s lead author, Heather Karsten, associate professor of crop production/ecology. When farmers are no longer using tillage to disrupt weed growth, they typically use more herbicides to control weeds.

“Farmers are particularly reliant on a few common herbicides for no-till production of corn and soybeans, such as glyphosate, which has resulted in the evolution of herbicide-resistant weeds that are now very problematic,” she said. “With more than 65% of agronomic crops under no-till production in Pennsylvania, those weeds are spreading, reducing crop yields and becoming very difficult to control.”

Karsten’s research group in the College of Agricultural Sciences has been studying sustainable dairy farming for more than a decade in experiments at Penn State’s Russell E. Larson Agricultural Research Center at Rock Springs. This integrated-weed-management study is the latest spinoff from that larger research project.

To test whether herbicide applications could be reduced in no-till production, lessening the environmental impact and selection pressure for herbicide resistance, researchers conducted a nine-year experiment using herbicide-reduction practices in a dairy crop rotation.

The rotation included soybean, corn with fall-planted cover crops, and three years of alfalfa, followed by winter canola. The following practices were used to reduce herbicide inputs: applying herbicides only in bands over corn and soybean rows and using high-residue, inter-row cultivation; seeding a small-grain companion crop such as oats with perennials alfalfa and orchardgrass; and plowing once in six-years to terminate the perennial forage rather than killing it with an herbicide.

These practices were compared with standard herbicide-based weed management in continuous no-till, which consists of repeated herbicide applications. To measure the results, researchers sampled weed biomass in soybean, corn and the first two alfalfa forage years.

In findings recently published in Agronomy Journal, the researchers reported that there was more weed biomass in the reduced herbicide treatment, leading to more weeds over the years in the reduced-herbicide corn and soybean treatments — but that the added weed pressure did not substantially affect crop yields or differences in net return. In the following alfalfa forage seeding year, weed biomass was rarely greater in the reduced-herbicide treatment, and was never greater by the second year of alfalfa forage.

Crop yield and differences in net return were similar in most crops and years, Karsten pointed out, explaining that the research results suggest that using an integrated-weed-management approach with reduced herbicide inputs can be effective.

“In this long-term study, we demonstrated that herbicide reduction is viable provided there is a diverse rotation with a broad array of control methods,” she said. “Increasing crop life-cycle diversity can reduce weed outbreaks and selection pressure for herbicide-resistance weeds. Using an integrated approach, it is possible to make agriculture more sustainable and environmentally friendly without decreasing productivity.”

Tour and learn more about Silvopasture