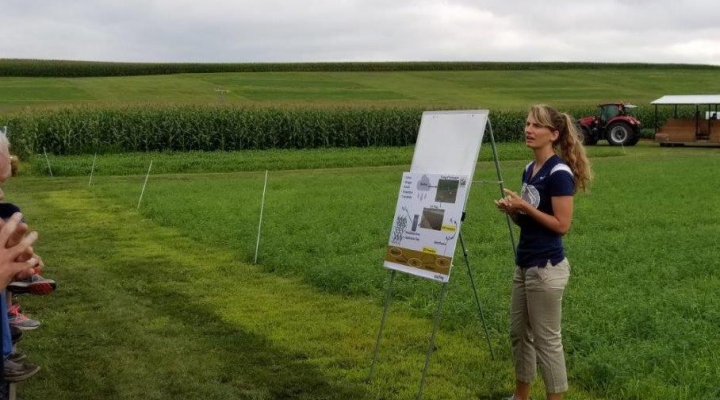 Mara Cloutier, shown here as a doctoral degree student in soil science and biogeochemistry, during a field day, is now a project manager at the Soil Health Institute, based in Raleigh, North Carolina. (photo: Penn State)

A greenhouse gas that contributes to climate change, nitrous oxide is 300 times more potent than carbon dioxide. To learn how no-till affects soil microbes that both produce and break down nitrous oxide, the researchers focused their study on a 40-year tillage experiment that has been maintained at Penn State’s Russell E. Larson Agricultural Research Center.

“We aimed to see whether the level of tillage in the long-term experiment affected the soil microbes responsible for net nitrous oxide emissions,” said team leader and study co-author Mary Ann Bruns, professor of soil microbiology and biogeochemistry in the College of Agricultural Sciences. “This is a particularly challenging objective because many diverse bacteria produce nitrous oxide, yet many others can convert it to an inert nitrogen gas that does not contribute to the greenhouse effect.”

The study, led by Mara Cloutier, a doctoral degree student in soil science and biogeochemistry when the research was conducted, collected and evaluated soil samples taken from plots that have been managed as no-till, chisel-disked or moldboard-plowed — three tillage practices that represent low-, intermediate- and high-intensity levels of physical disturbance, respectively — for four decades.

The researchers assessed soil bacterial communities and denitrification gene markers (DNA sequences that can be used to identify microbe species) in soils sampled from corn and soybean crops. They also collected soil samples at three growth stages of corn and soybean plants to evaluate microbiomes in soils influenced by tillage, crop type and crop stage.

In findings recently published in Soil & Tillage research, the researchers reported that tillage had more influence on microbial community composition and gene markers than either crop type or crop stage. Compared to the other tillage practices, no-till soils contained fewer marker genes for some types of nitrous oxide-producing bacteria but no differences in nitrous oxide-degrading bacteria, suggesting that no-till soils may generate and emit less nitrous oxide gas.

Bruns, who is a member of a national task force on Microbes and Climate Change for the American Academy of Microbiology, explained the research could help lower nitrous oxide emissions.

“If we can find management practices that increase the activity of bacteria that degrade nitrous oxide to inert nitrogen gas,” she said, “fertilizer nitrogen would still be lost, but as the more benign nitrogen gas.”

The no-till soils in this experiment contained more soil organic carbon, according to Cloutier, who is now a project manager at the Soil Health Institute, based in Raleigh, North Carolina.

“Our main findings were that tillage results in distinctive soil microbiomes, with no-till soils containing different pools of nitrogen-cycling bacteria. Using no-till as a carbon-sequestration strategy may result in nitrogen retention benefits, but more research is needed to understand how microbes affect these carbon-nitrogen relationships.”

Sjoerd Duiker, professor of soil management and applied soil physics, who manages the long-term tillage experiment at the Larson center, and Tiffanie Alcaide, technician in the Department of Ecosystem Science and Management, contributed to the research.

This research was partially funded by U.S. Department of Agriculture’s National Institute of Food and Agriculture.