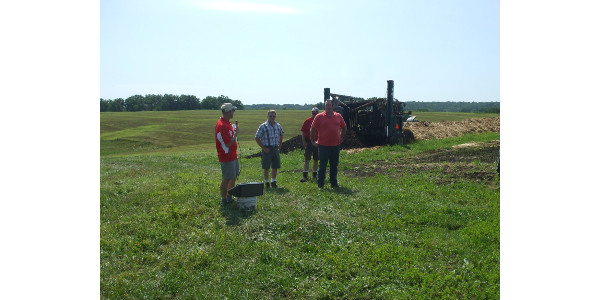 Host of the Farmers of the Sugar River’s “No Till on a Dairy,” Dan Truttmann, introduces himself and family, while Jason Fuller of Carbon Cycle Consulting, on far right, is ready to explain the compost windrow that is about to be turned in the background. (Courtesy of Green County Land and Water Conservation Dept.)

NEW GLARUS, Wis. — Farmers & residents from several area watersheds attended the Farmers of the Sugar River’s “No-Till on a Dairy” summer field day on August 7th hosted by Truttmann Dairy LLC. The first stop attendees made was to see the compost windrows, which is an important part of manure management on the Truttmann farm. Jason Fuller, from Carbon Cycle Consulting, explained the composting process and demonstrated the aeration process as well as compost spreading. The composting process is used to convert solid manure from bedded pack areas, such as the calving pen and calf sheds, into a nutrient rich compost that is used to fertilize alfalfa and other crops. Manure solids from a screw press that separates solids from liquid manure are also added to the windrows to provide additional nutrients to the compost microbes. Extra separated solids (manure fibers) are used as a bedding source for the dairy cows and for pregnant heifers. The composting process reduces the volume of manure used by two-thirds, does not produce methane if kept in an aerobic state, and is nearly odor free.

The second stop featured a corn field in which the corn was no-till planted into a living cover crop of winter rye. The rye was then terminated and protected the soil from erosion and weeds while the corn was getting established. While there, Terry Loeffelholz, from the Lafayette County Land Conservation Department, explained a groundwater study being conducted with Grant, Iowa and Lafayette counties that is looking at the sources of and reasons for well contamination.

After lunch, the last point of interest was a soybean field that was also no-till planted into a living cover crop of winter triticale. In this case the cover crop was terminated a month after planting, again providing protection against soil erosion and weeds. The cover crops established in the fall also help keep the nutrients from liquid manure and compost applications from leaching from the soil profile. A soybean plant was dug up and it showed great root nodulation. The nodulation meant that the plant was fixing nitrogen on the roots in the soil for future use by that plant or a future one.

The field day was sponsored by Farmers of the Sugar River, which is a producer-led watershed group that receives funding from the Department of Agriculture, Trade and Consumer Protection and has many other local business sponsors. The group is made up of farmers that want to share conservation practices and techniques with farmers and others to improve water quality in the Sugar River.