Home » No reports of spotted lanternfly in Missouri but vigilance urged 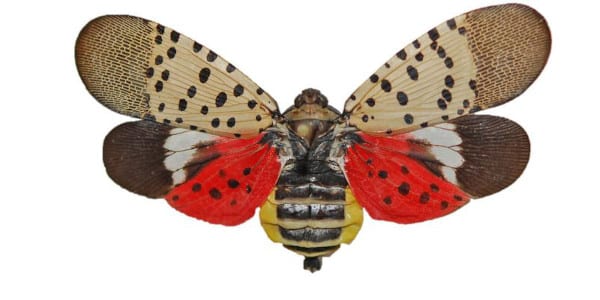 “Adult SLF in vineyards will likely be found from July through December, when it will be important to inspect equipment such as tractors, sprayers, mowers, harvesters and even vineyard workers’ vehicles prior to movement to other vineyards,” says viticulture extension professor Dean Volenberg of the University of Missouri Grape and Wine Institute. (Courtesy Photo via Penn State Extension)

COLUMBIA, Mo. – While not yet detected in Missouri, spotted lanternfly remains a concern for vineyards, certain trees and specialty crops as it continues to spread west.

“What appears to be the most damaging is the initial invasion of SLF,” Volenberg says. “But now we have control measures that should help mitigate economic damage from the pest.”

When SLF initially invaded vineyards in Berks County, Pennsylvania, in 2014, it inflicted extensive damage, even causing some grapevine death the following season.

“Adult SLF in vineyards will likely be found from July through December, when it will be important to inspect equipment such as tractors, sprayers, mowers, harvesters and even vineyard workers’ vehicles prior to movement to other vineyards,” Volenberg says.

Since its discovery in Pennsylvania, SLF has been reported in 10 more states: New Jersey, New York, Delaware, Maryland, Virginia, Connecticut, Massachusetts, Indiana, Ohio and West Virginia, according to the USDA.

In September 2021, a single specimen of spotted lanternfly turned up at the Kansas State Fair as part of a participant’s insect collection. The specimen was collected from a back porch that spring and was reported to be very tattered. It is believed the lone specimen may have “hitchhiked” into Kansas by car, train or some other vehicle.

Of more concern is a July 2021 report out of Indiana, Volenberg says. An infestation of spotted lanternfly was discovered in a wooded area in the town of Vevay, 330 miles east of St. Louis.

Sarah Phipps, state survey coordinator for plant pest control at the Missouri Department of Agriculture, says surveyors across the state have been checking for spotted lanternflies. “Thankfully, we have not found any in Missouri,” she says.

Spotted lanternfly has four nymphal stages, an adult stage and an overwintering egg mass. There is one generation per year. Egg masses are laid in roughly 1-inch segmented rows that are often covered with a grayish putty-like substance. The egg masses can be found on many hard surfaces, both natural and artificial.

What if you encounter what you suspect is a spotted lanternfly? Take a photo, making sure the specimen is in focus, collect the insect, and email the photo and the location to plantpest@mda.mo.gov.