Subscribe
Home / South Dakota / No one turned off the tap 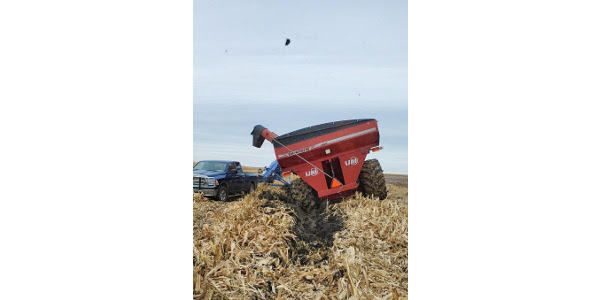 “My friends and I think we tried too hard this spring to plant because now we can’t get the crop harvested. I have gotten the grain cart stuck a couple times. I know people who have gotten their combine stuck,” explains Groton farmer, Chad Johnson, 47. (Courtesy photo)

“This season tells the story of a long-term climate trend we are seeing of wetter weather. It has created many challenges for our farmers,” Edwards says. “Throughout the growing season I heard farmers say they would rather have a drought than a flood because a flood does more damage to the land and equipment. Flooding creates so much more work and managing a farm through an excessively wet year requires much more labor.”

Groton farmer, Chad Johnson would agree with the farmers Edwards visited with. He can easily compare the two extremes because in 2018 his area was under a severe drought. And beginning with an April 2019 blizzard, just in time for calving season, excess moisture has challenged every aspect of his farming operation.

“The heavens opened up and it rained, rained and rained. No one ever shut off the tap,” explains the fourth-generation farmer.

The 32-plus inches of rain his farm received led to a few deaths at calving and limited the number of acres Johnson was able to plant. This fall, standing water and muddy soil created by frequent rain and snow events make getting combines into corn and soybean fields challenging to say the least. “My friends and I think we tried too hard this spring to plant because now we can’t get the crop harvested. I have gotten the grain cart stuck a couple times. I know people who have gotten their combine stuck,” explains Johnson, 47.

As of December 2, he has 450-acres of corn left to harvest. Now, the crop is under 15-plus inches of snow. “I typically look forward to harvest. It’s when I get to see what that new hybrid I planted did. It’s when I receive the fruits of my labor. Not harvest 2019. This fall, farmers in our area began referring to the season as Hellvest.”

Johnson’s story is not unique. According to the U.S. Department of Agriculture, due to excess moisture, South Dakota producers were unable to plant 4 million acres. The greatest number of prevent plant acres of any state.

“It’s certainly a year for the history books and I’m afraid the impacts will be seen into the future,” says S.D. Secretary of Agriculture, Kim Vanneman.

Impacts like soil compaction, explains Anthony Bly, SDSU Extension Soils Field Specialist. Caused by heavy equipment tracking on excessively wet soil, soil compaction decreases the soil’s ability to store water and transport nutrients, it also makes it difficult for plant’s roots to penetrate the soil because “it takes the pores out of the soil,” Bly says.

Like so many farmers this season, Bly, a fourth-generation Garretson farmer, had to make some tough management decisions which led to soil compaction. “Farmers, like me, did what we had to do. We needed to harvest on wet soils because the crop was ready and if we waited, we didn’t know what the weather would do.”

Compaction isn’t the only long-term side effect of 2019 weather. When farmers are unable to plant or harvest their crops, the entire state feels the impact, Vanneman explains. “Agriculture is the backbone of South Dakota and when agriculture is impacted, there are ripple effects across the state. Producers have fewer dollars to spend in town which has negative impacts on Main Street, in small communities like Winner and large ones, like Sioux Falls.”

But what about the disaster relief programs and crop insurance? “These programs may help us cover our rental or land payments and input expenses, but there is no possibility of income. These payments don’t cover living expenses. Most farmers will just be happy if they can break even,” says Beresford farmer, Larry Birgen, 58.

Due to standing water and mud, Birgen was only able to plant 30 percent of his corn and soybean acres. Which means he didn’t use all the inputs he pre-paid for at his local cooperative. Although he hopes the 2020 crop uses up the pre-paid inputs and then some, Birgen says with so many farmers in a similar situation, it makes it tough for cooperatives and privately-owned seed, agronomy and grain businesses.

“This is really hurting our cooperative,” says Birgen who sits on the board of directors for Southeast Farmers Coop. “Drive by their bunkers and they are only a quarter full, and typically by this time of year they would be clear full.”

Serving Union, Clay, Lincoln, Turner and Yankton Counties, many of the farmer members Southeast Farmers Coop serves have experienced challenges related to excess moisture going on three years now. The challenges extend beyond input sales, explains Don Truhe, General Manager of Southeast Farmers Coop. “If farmers can’t get into their fields, not only does it impact sales of seed and fertilizer, but we don’t get paid to apply the fertilizer or spray the fields.”

And the 40-plus fulltime employees who count on overtime during planting and harvest also took a financial hit, which impacts the many rural communities they call home. Annually, Southeastern Farmers Coop pays more than $3 million in salaries. “Because we didn’t have the busy season we typically do, it impacts what our employees earn and their ability to spend,” Truhe says. “We spent a lot of years strengthening our balance sheet just for this type of season. We will be OK. But other cooperatives or private businesses may not be.”

We’re in this together
With his combine parked in the shop, Johnson prays for warm weather to melt the recent snowfall. Then, he hopes for freezing temps so he can get back into his corn fields. “What we need is some poor man’s concrete. If the snow melts and the ground freezes just enough, we can get this harvest wrapped up. I’m so over 2019. It’s been one heck of a year for our family and friends.”

Earlier this year, his family experienced a loss when a young farmer committed suicide. “This weather is taking a toll. We talk about the mental health aspect of it all the time. That’s why, if there are young farmers out there who are hurting, please ask for help. It’s nothing to be ashamed of.”

Vanneman echoes his thoughts. “Like everyone in the industry, we’ve watched with growing concern the impact this year has had on the mental health of producers and others in the ag industry,” she says.
Vanneman reminds South Dakotans of the resources available to farmers, ranchers, their family and friends, like the 24/7 Avera Farm and Rural Stress Hotline:1-800-691-4336.

She adds that in addition to Presidential disaster declarations, requested by Governor Noem to provide assistance to communities and counties impacted by weather, there are also programs available through U.S. Department of Agriculture, Farm Service Agency.

In addition to resources, Johnson says when he needs motivation, he looks to his family and friends who are farming. “We are in this together. It’s a tough deal. Farmers are going bankrupt. But we are resilient. I think about the fact that my dad and uncle made it through tough times. I think about my son, Porter, who will be the fifth generation to farm, and I keep pecking away.”