Subscribe
Home / Missouri / No difference in cattle gains on well vs. pond water 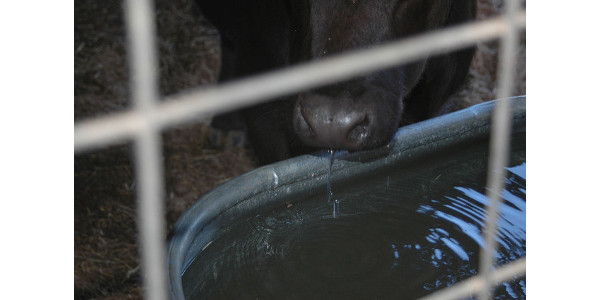 The results showed only iron tended to be slightly above the acceptable levels for human consumption in the pond water among the minerals. Sulfate and nitrate levels were well within the acceptable range for both sources of water. (Rich Anderson via Flickr)

MT. VERNON, Mo. — Producers know that quality water is the single most important nutrient for the survival of animals.

However, quantifying the differences in cattle’s performance on good versus poor quality water is tricky to do says Eldon Cole, a field specialist in livestock with University of Missouri Extension.

Back in the mid-nineties, a trial at University of Missouri’s Southwest Research Center near Mt. Vernon, was set up to evaluate the impact of clean and dirty water for grazing beef cattle.

“The presumption was there would be measurable differences in stocker gains, cow-calf performance at weaning and perhaps noticeable disease patterns,” said Cole.

Incorporated into the replicated project were high and low endophyte fescue pastures.

Since the test pastures were 2.5 acres each of the four years, the water supply for the dirty pond water pastures was hauled daily from nearby farms that had cattle traffic in them. The clean water supply was from a deep well located on the Southwest Center.

“The clean water tanks were scrubbed weekly and the water usually appeared to be clean enough for human consumption. In contrast, the dirty pond water was just that, dirty, dingy and foul smelling at times,” said Cole.

An analysis of the water quality was done in the spring and fall from each source, each year.

The results showed only iron tended to be slightly above the acceptable levels for human consumption in the pond water among the minerals. Sulfate and nitrate levels were well within the acceptable range for both sources of water.

Fecal coliforms were present in the pond water each period. In some cases the bacterial count was several thousand units above the safe level as defined in the literature.

During the last three years of the study, one pasture was set up to give the cattle a choice between either clean or dirty water. Once again, virtually no difference in the cattle’s choice of water was noted when they were offered side-by-side.

According to Cole, this study does not support the conventional wisdom often referenced in news articles that proclaim significant improvements in beef cattle performance. Some reports even claim daily stocker gains of over 0.5 pound per day when good quality water is provided.

“Perhaps before you write off your ponds as being detrimental to your cattle’s performance, you should test your water. Most of the concern in the articles I’ve seen seems to center around elevated sulfate levels in the western and northern states’ pond water supplies. This did not appear to be a problem with the southwest Missouri pond water,” said Cole.

Of course, there are other issues with cattle having access to ponds for reasons such as foot rot, and causing loss of fish and wildlife habitat.

“However, if your pastures are giving your cattle fescue toxicosis or heat-stress problems, pond access can be cooling and helpful,” said Cole.

Cole also notes that there are degrees of dirty, filthy water and watchful cattlemen should be able to distinguish what is acceptable and what isn’t for their farm.

“It’s still best to provide the best quality you can and plenty of it, but don’t be alarmed by the news articles that are negative to pond water and think you’re about to seriously harm your cattle,” said Cole.