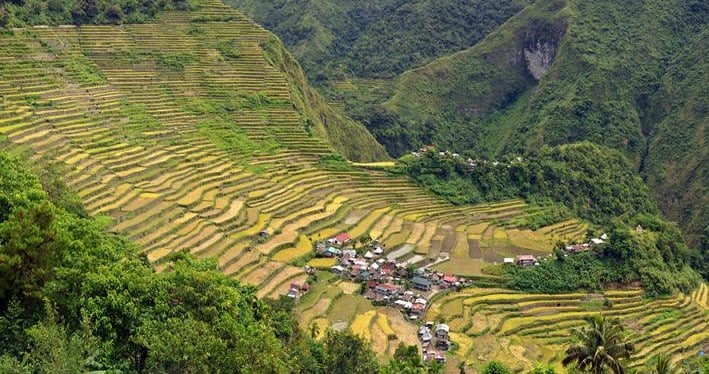 Rice fields in the Cordillera mountains of northern Luzon, the Philippines. A new study based on surveys and interviews of more than 115 rice farmers in the Nueva Ecija region, part of the 'rice bowl' of the Philippines, finds that that most families at risk for Vitamin A deficiency can't grow Golden Rice themselves, and most commercial farmers won't grow it either. (Courtesy Glenn Davis Stone, Washington University in St. Louis)

ST. LOUIS — Heralded as a genetically modified crop with the potential to save millions of lives, Golden Rice has just been approved as safe for human and animal consumption by regulators in the Philippines. The rice is a beta carotene-enriched crop that is intended to reduce Vitamin A deficiency (VAD), a health problem in very poor areas.

But a new study finds that most families at risk for VAD can’t grow Golden Rice themselves, and most commercial farmers won’t grow it either.

“Many families with Vitamin A deficient kids don’t even have rice land to plant it,” said Glenn Davis Stone, professor of sociocultural anthropology and environmental studies in Arts & Sciences at Washington University in St. Louis and co-author of a new paper in the journal Technology in Society. “And those in the mountains won’t plant it because it has been bred into the lowland varieties of rice known as IR-64 and RSC-82.”

The regulatory approval in the Philippines is a landmark for the scientists who developed Golden Rice for nutritional purposes. It is the first such approval in the developing world. But even after nearly three decades of development, Golden Rice is still beset by problems, according to Stone.

Golden Rice still has to be approved for commercial sale, and it still needs a company to grow marketable quantities of seed. And even then, Stone argues, there is no clear path for the rice to get to poor children.

Stone, an internationally recognized expert on the human side of global agricultural trends, was an early advocate for keeping an open mind about ‘humanitarian’ GMO crops, such as Golden Rice. Since 2013, he has directed a major Templeton Foundation-funded research project on rice in the Philippines.

Stone’s new study is based on surveys and interviews of more than 115 rice farmers in the Nueva Ecija region, considered part of the ‘rice bowl’ of the Philippines.

Writing in the Feb. 7 issue of The Conversation, Stone and his study co-author Dominic Glover, a rice researcher at the Institute for Development Studies at the University of Sussex, suggest that backers of Golden Rice — and even some economists who have tried to project its health impacts — have made certain flawed assumptions about farmers’ willingness to plant the crop.

“The old claim, repeated again in a recent book, that Golden Rice was ‘basically ready for use in 2002’ is silly,” Stone and Glover wrote. “As recently as 2017, IRRI made it clear that Golden Rice still had to be ‘successfully developed into rice varieties suitable for Asia, approved by national regulators, and shown to improve vitamin A status in community conditions.’

“The Philippines has managed to cut its childhood VAD rate in half with conventional nutrition programs. If Golden Rice appears on the market in the Philippines by 2022, it will have taken over 30 years of development to create a product that may not affect vitamin levels in its target population, and that farmers may need to be paid to plant.”