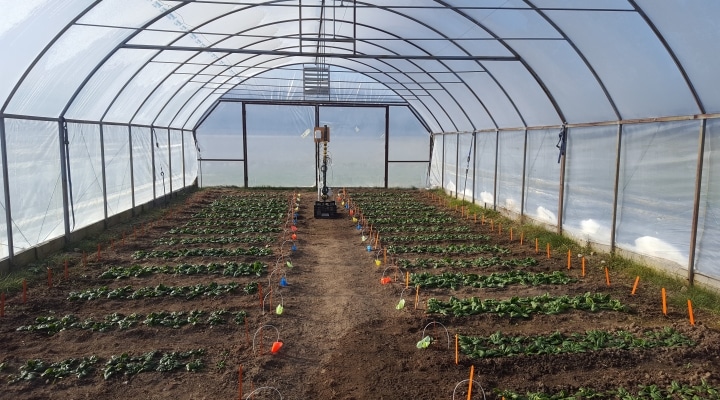 WILLSBORO, N.Y. — How much nitrogen fertilizer does winter-grown, high tunnel spinach really need? Cornell vegetable specialists had heard of some producers applying up to 600 pounds per acre.  Their research conducted with Northern New York Agricultural Development Program (NNYADP) grant funding suggests that growers in colder climates may be able to save on nitrogen costs while harvesting the popular leafy green for late year and early spring sales.

The Cornell guidelines suggest applying 130 pounds of nitrogen (N) per acre for high tunnel spinach crops; however, “we have heard of a wide range of applications with reports of 200 to 600 pounds per acre,” said Reid.

The NNYADP research project compared spinach grown with application of 65, 130 or 300 pounds of N per acre and without any N applied to the unheated, high tunnel trial plots from 2017-2020. The fertilizer, a 10 percent N commercial fertilizer blend of vegetable protein meals, was applied one week before the planting of August 27-seeded spinach seedlings and later September 10-seeded spinach seedlings. The crop remained uncovered throughout the trial and received overhead irrigation as needed.

“The control plot with no added nitrogen yielded as much spinach as plots treated with up to 200 pounds of nitrogen per acre across all four harvest dates,” explained project co-leader Elisabeth Hodgdon, a vegetable specialist based in Plattsburgh, New York, with the Cornell Eastern New York Commercial Horticulture Program.

The researchers recommend that high tunnel growers seed their spinach crop in late August for transplanting in September rather than into October.

“The earlier planting date of September 21 produced significantly greater yields than the spinach planted two weeks later on October 9. The later planting did, however, catch up with similar yields by the April 2nd harvest date,” Hodgdon noted.

“This cold-climate research suggests that northern New York growers may be able to reduce input costs by forgoing or reducing fall fertilizer application. However, soil nutrient levels from the previous sod in the tunnel may have influenced the results of this initial trial. We are now evaluating whether the source of nitrogen fertilization impacts the response of the spinach to the rate of application,” said Reid.

For the 2019-2020 trials, the research team plowed the sod under before setting up its high tunnel to receive August 30-seeded spinach seedlings on September 24, 2019. This trial is evaluating four rates of N fertilization using two different fertilizer types: a 13 percent water insoluble nitrogen feather meal and the 10 percent commercial fertilizer blend used in the 2018-2019 trial.

The trials in 2017-2018 evaluated three sources of nitrogen: urea, blood meal, and alfalfa cover crop. In 2018-2019, the researchers evaluated spinach yield under different rates from a single source: a 10 percent commercial fertilizer blend of vegetable protein meals as noted earlier.

These three years’ NNYADP spinach trial reports and a pre-recorded Introduction to Winter Growing webinar are posted on the Northern New York Agricultural Development Program website under the Research: Horticultural and Local Foods tab at www.nnyagdev.org.

Second round of CFAP for farms now available

Farm to school in Seneca County: Back to school updates