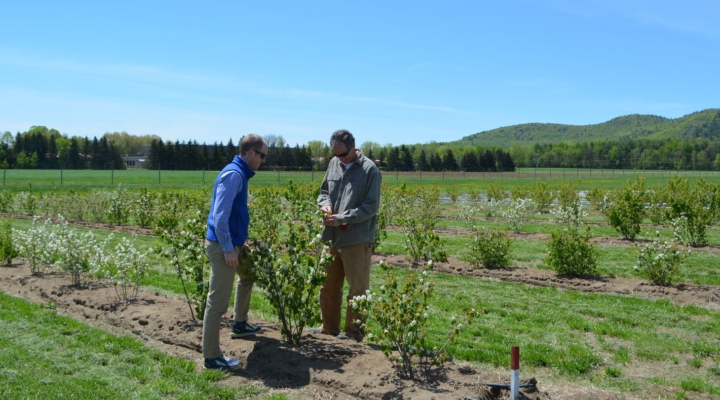 WILLSBORO, N.Y. — Young specialty fruit trials funded by the farmer-driven Northern New York Agricultural Development Program (NNYADP) will be among the many crop plots for touring during the Cornell University Willsboro Research Farm Open House event on Wednesday, July 10 from 1:30 pm to 4:00 pm. The tour of the farm facilities and research fields is free and open to the public. It will leave the main office at 48 Sayward Lane, Willsboro, N.Y., at 2:00 pm.

NNYADP grants to the Willsboro farm support the research aimed at developing new specialty fruit crops suited to the Northern New York climate and growing conditions. Longer-term trials with Juneberry there and now on farms in the northern NY region have been joined by a newer investigation into Aronia and Honeyberry.

The Juneberry nursery at the farm is a living collection of wild and commercial lines of the fruit considered to have tremendous potential to become a major fruit crop in Northern New York and the Northeast. Davis is collaborating with Juneberry expert and SUNY Plattsburgh botanist Michael Burgess, Ph.D., on the Juneberry trials.

This year marks the fourth full growing season for 11 commercial varieties and four ornamental varieties of Juneberry at the research farm, and the third season for nine wild-collected lines.

With numerous scientific studies documenting its high antioxidant and phythonutrient levels, Aronia has been labeled a “superfood” and has quickly blossomed into a multi-million dollar industry in North America. The Willsboro Aronia trial is focused on four fruit-producing varieties now in their third growing season.

The blue Honeyberry is a perennial, fruit-producing shrub that is native to the cool temperate forest regions of North America, Asia and Europe. Fruit breeders in Oregon and at the University of Saskatchewan have prompted a surge in recent interest in this flavorful fruit in North America. The Honeyberry trial at the Willsboro Research Farm is evaluating 15 commercially-available cultivars.

Davis is also evaluating demonstrating site plantings of the fruits with participating growers in Clinton, Franklin, Jefferson and St. Lawrence counties. The research has been featured by Mountain Lakes PBS television in Plattsburgh, N.Y., and WCAX-TV, Burlington, VT.

VT to offer seminars on cooking with game