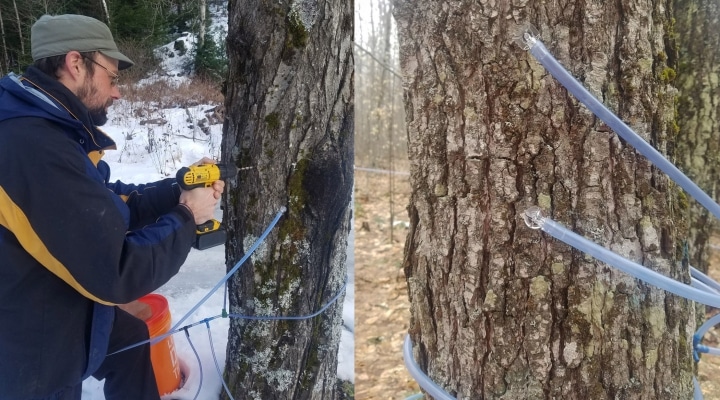 LAKE PLACID, N.Y. — Maple production research by the farmer-driven Northern New York Agricultural Development Program (NNYADP) is helping NY maple producers evaluate and add opportunities to increase sap and syrup production. The Northern New York maple industry has grown from a $3.25 million annual industry in 2008 to an estimated $10-plus million industry with room yet to grow.

“Recent projects here that looked at the optimum timing for tapping maple trees indicated that early tapping to capture early season sap runs and re-tapping later in the season could have potential to increase syrup production yields by at least 20 percent or produce a $6 per tap profit increase,” says Wild.

“The data from the most recently-completed trial were not as expected, most likely as a result of the northern New York weather and short maple season in 2019. Although one could say it was an ideal season for consistent sap flow, the flow did not fully start until March 15 and quickly ended April 19,” Wild explains.

Four re-tapping treatments were tested in 2019 with no statistically significant differences observed with any of the methods. The best result was seen with the trees tapped March 1 and not re-tapped. Trees that had a second dropline and spout added near the end of the season were second best with an 18.5 percent increase in production over trees tapped at the same time but not re-tapped.

For now, Wild says, “It is not recommended to tap maple trees unless a distinctly clear slowdown of sap flow is observed. We need more data before any clear guidelines can be determined.”

Wild is replicating this re-tapping trial in 2020 to obtain data under another year’s conditions.

In late March, sap continued to flow in the northern climate where the Uihlein Maple Research Forest is located. With temperatures slowly starting to warm and days projected not to freeze, Wild will soon be re-tapping trees there. The 2020 data report will be posted later this year at www.nnyagdev.org.

The results of past Northern New York Agricultural Development Program maple projects on the timing of tapping, the impact of tubing size for sap collection, and initiating the cloning of NNY “sweet tree” maples are posted at www.nnyagdev.org.