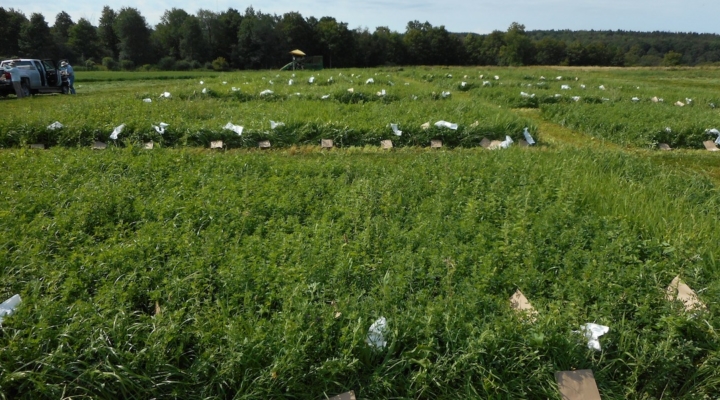 ALBANY — The spring harvest of alfalfa-grass mixes may account for up to half of the total forage yield of those crops for dairy farmers. The results of alfalfa-grass research funded by the farmer-driven Northern New York Agricultural Development Program may suggest a new option for dairy farmers looking to enhance forage production. The report is posted under Field Crops: Alfalfa at www.nnyagdev.org.

Cornell University Animal Sciences Professor Debbie J.R. Cherney, who led the research conducted on dairy farms in Northern New York, notes, “It is clear from this research that switching the grass species to meadow fescue in mixtures may have more impact on forage quality than switching alfalfa varieties.”

Furthermore, Cherney notes that the combination of reduced-lignin alfalfa planted with meadow fescue, a winter-hardy grass species, can result in a large increase in neutral detergent fiber digestibility, a measure of the expected energy value that the forage will deliver to dairy cows. Higher digestibility value contributes to cow health and milk production.

Forage quality of both grass and alfalfa can be improved by well-informed variety selection. The field trials at two farms in Jefferson County and one farm in Lewis County in 2016 and 2017 provided researchers, Extension field crop specialists, and farmers the opportunity to learn how new varieties of grass and alfalfa seed released by the seed industry will perform under Northern New York soils and climate.

The trials also evaluated a meadow fescue variety developed by the USDA with reportedly higher digestibility than other meadow fescues.

The plantings and evaluations conducted at the NNY farms produced data on yield and the quality of the alfalfa and of the grass grown in various mixes. The alfalfa and grass were analyzed separately for crude protein, fiber, digestibility and lignin values.

With a 2018 grant from the Northern New York Agricultural Development Program, the Cornell team will evaluate an alfalfa-grass mixed seeding with timothy established in 2017 in Lewis County, along with seven grasses and three alfalfa varieties there.

The regional research in 2018 will also include testing meadow fescue at several seeding rates in plantings with alfalfa, and the addition of a new variety of meadow fescue that looked very promising in 2017.

Students have chance to explore careers in dairy

Projects show innovation in conservation
May 18, 2020