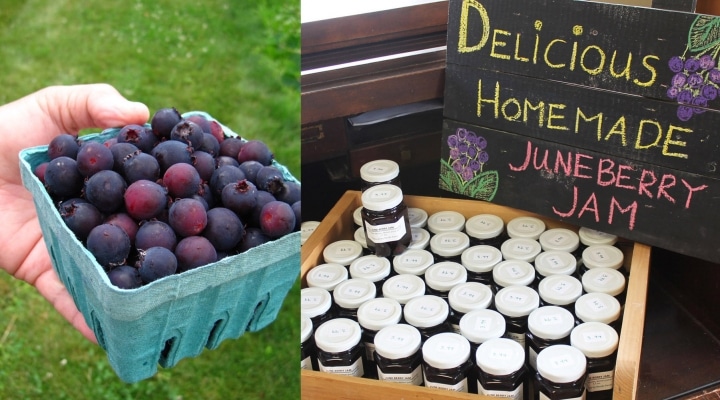 WILLSBORO, N.Y. — Three high-antioxidant, high-economic value “superfruits:” juneberry, honeyberry, and aronia berry are the focus of research funded by the Northern New York Agricultural Development Program (NNYADP). These fruit crops represent significant income potential from fresh market and value-added sales in New York State.  They are northern climate-tolerant and have proven to be consumer-friendly in other areas of the U.S. and globally. NNYADP-funded on-farm trials of the three fruits are evaluating how well they adapt to and thrive under New York growing conditions.

Juneberry is a blueberry-like fruit rich in calcium, fiber, iron, manganese, and protein. In 2013, when the NNYADP provided funding to establish a Juneberry nursery of commercially-available and wild-collected varieties at the Willsboro Research Farm, at Willsboro, New York, this historically-significant fruit was considered a New York State endangered species.

Davis added that the fruit harvested from the young wild-collected juneberry plants is smaller compared to some of the commercial varieties, and the ornamental varieties appeared to favor healthy plant growth over fruit production in 2019.

Honeyberry, a member of the honeysuckle family, and aronia berry, of the rose family, were added to the NNYADP novel fruit project in 2018, with trials planted at the Willsboro farm and on regional farms.

“Honeyberry, referred to by the Japanese as ‘the elixir of longevity,’ has seen a surge in public interest with the development of varieties adapted to a cooler climate, and offers New York growers an exciting new specialty fruit for fresh market sales,” said Davis.

“Aronia berry has been labeled a ‘superfood’ for its exceedingly high antioxidant and other beneficial phytonutrient content, and for the more than 60 value-added processing opportunities that support its standing as a multi-million dollar industry,” Davis explained.

The 2019 NNYADP novel fruits project report notes that a biocontrol nematode application was made to manage rose chafers and Japanese beetle in the juneberry trial at the Willsboro farm. With NNYADP support, the science for using insect-attacking nematodes was initially created as a solution for managing an alfalfa crop pest. The protocol developed in northern New York has since been applied to a number of crops in multiple states.