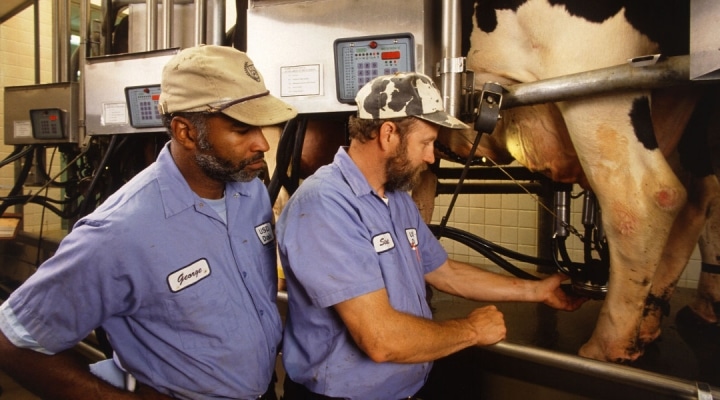 A six-week mid-winter trial evaluated two types of post-milking teat dips: a powdered chlorhexidine acetate teat treatment and a foaming 1 percent iodine dip. The final dataset totaled 331 cows that were milked three times a day. The cows were housed in freestall barns bedded with sand or sawdust or in a tiestall barn with foam mattresses bedded with sawdust. All cows received pre- and post-milking dip treatments.

Teat skin chapping and thickening of the outer layer of skin on the teat ends can reduce the ability to achieve clean teat ends. This creates the opportunity for increased environmental bacterial pathogen colonization and thus increases the risk of mastitis and higher somatic cell count. The 331 cows in the study were evaluated for clinical mastitis and subclinical mastitis infections, somatic cell count, linear score, teat skin condition, and teat end score.

There was no difference in number or odds ratio for coliform or Streptococcus spp. infections. The researchers found no significant difference between the two study groups as to teat skin condition, teat end scoring, or linear scoring.

To reduce the risk of cold climate-related mastitis infections, Heather Dann, Ph.D., a research scientist with the William H. Miner Agricultural Research Institute, Chazy, N.Y., suggests the following as best management practices for dairies milking in colder temperatures and in situations where cows may be exposed to cold and windchill in the barn or going to and from the milking parlor:

The average temperature of 42 degrees Fahrenheit in the barns during this trail was moderate for a northern New York winter. The researchers emphasize that different results might have been recorded under harsher, more typical winter temperatures. To read the complete Powdered Teat Dip Post-Milking Under Cold Weather in NNY report, see the Research: Dairy Research projects tab at www.nnyagdev.org.