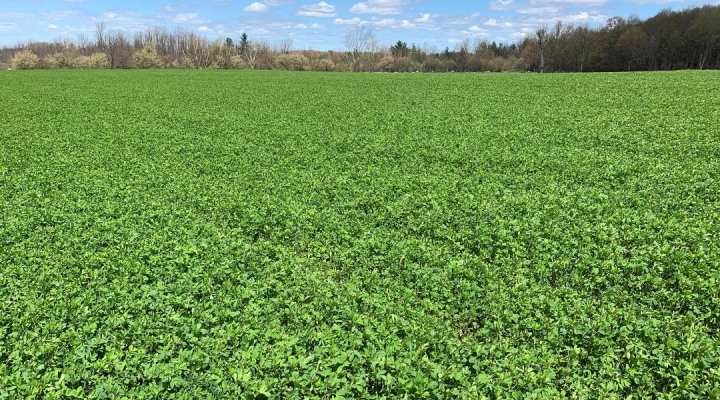 Prior to an application of biocontrol nematodes four years ago, this field now filled with alfalfa in North Bangor, New York, was only able to grow grass hay. (Photo: Mary DeBeer)

CANTON, N.Y. — The biocontrol nematode science developed in northern New York to manage alfalfa snout beetle is now being tested for the reduction of other agricultural pests, namely corn rootworm, in the Midwest.

The success of this research has fostered trials now underway in multiple states.

“We faced huge losses to alfalfa snout beetle, the farmers who direct the Northern New York Agricultural Development Program made a commitment to however long it would take to develop the real-world science needed to find a solution. Today, the success of the research made possible by that steadfast commitment is paying off not only for alfalfa growers and dairy farmers in northern New York, but for the growers of multiple crops in multiple states and Canada,” said NNYADP Co-Chair Jon Greenwood, Madrid, New York.

In May 2021, Shields delivered a concentrated slurry containing the biocontrol nematodes to two 140-acre center pivot locations in western Nebraska. The slurry was diluted prior to application. Shields notes, ” The application in Nebraska was made about the time of the corn rootworm hatch there. In early July, the farmer reported only minimal root damage to his corn and almost no corn rootworm larvae. This is excellent news as corn rootworm as been overrunning whatever-traited corn he has planted.”

An independent public company has awarded funding for four years of biocontrol nematode trials for reducing corn rootworm in Iowa, Illinois, and Nebraska. The company is also funding internal trials in southwest and central Wisconsin and in Minnesota.

Additional trials are ongoing at several farms in Ontario, Canada. In Alabama, an Auburn University entomologist is evaluating the protocol for managing billbugs that damage lawn, sod, and grass crops.

In August 2021 in northern New York, agricultural entrepreneur Mary DeBeer will make a trial application of the biocontrol nematodes on a potato field bothered by wireworms. DeBeer established a biocontrol nematode-rearing laboratory on her family farm in Moira, New York, in 2016. Shields has advised DeBeer on the combined strains of nematodes and the rate of application to apply to the potato field.

The history of the science and success of Shields’ biocontrol nematode research in field crops and berry crops is posted on the NNYADP website at https://www.nnyagdev.org.

Cornell Cooperative Extension trials in northern New York proved that the biocontrol nematodes could survive application in a manure solution so farmers can accomplish crop fertilization and pest protection as one task.