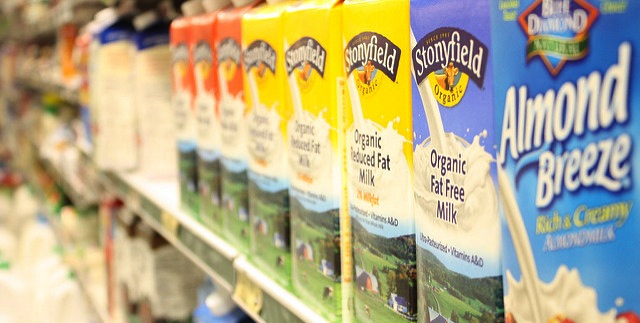 ARLINGTON, Va. — The U.S. Food and Drug Administration’s (FDA) long absence of enforcement of its own food standards has allowed the marketing of hundreds of deceptively labeled dairy imitators – a situation requiring immediate action by the federal government, National Milk Producers Federation officials told the agency during a high-level meeting in Maryland today.

Food policy staff from the National Milk Producers Federation (NMPF), led by President and CEO Jim Mulhern, met with key FDA regulators to discuss the dairy organization’s concern over the agency’s persistent inaction toward the misleading labeling practices of plant-based food manufacturers. During the last two decades, plant-based “milk” imitators have flooded the market, using dairy terminology and imagery to advertise their products as suitable replacements for cow’s milk, despite the fact that they are nutritionally inferior. While FDA’s own standards of identity clearly stipulate that products labeled as “milk” must come from a lactating animal, the agency has consistently turned a blind eye to violations of these standards, thereby encouraging these imitation dairy manufacturers to inappropriately use that term, as well as other dairy product terms like “cheese,” “yogurt,” and “ice cream.”

“Today’s meeting with FDA allowed us to convey our concern that in the absence of enforcement of existing clear and consistent regulations, well-defined product labels lose their meaning,” said Mulhern. “In the case of imitation milks, these beverages are nothing but a factory-made slurry of ground-up nuts or seeds combined with water, sugar, emulsifiers and thickeners. By comparison, cow’s milk has attracted and nourished generations, and built a reputation as a natural food with a consistent package of nine essential nutrients. It is misleading and deceptive to allow these nutritionally inferior imitators to use our hard-won reputation to their advantage.”

NMPF surveyed imitation dairy beverages in the marketplace and concluded that none of the imitation products matched the nine essential nutrients found in cow’s milk. The strongest discrepancies were noticed in amounts of protein, sodium and potassium. While almond “milk” has become the most popular dairy alternative, it fails to deliver one of real milk’s core nutrients: protein; almond beverages contain just 1 gram per serving, compared to real milk’s 8 grams (other popular milk imitators, including rice- and coconut-based beverages, also offer little to no protein). The survey also highlighted the amount of sodium added to dairy imitators for flavor. About two-thirds of the products surveyed contained more sodium than cow’s milk (which is all naturally occurring), some close to double the amount. A similarly large majority failed to offer the same amount of potassium – one of three nutrients most lacking in Americans’ diets, according to government dietary research.

NMPF executives pointed out that the current federal Dietary Guidelines for Americans admonish consumers that “other products sold as ‘milks’ but made from plants are not included as part of the dairy group [of recommended foods] because their overall nutritional content is not similar to dairy milk.”

“Beyond the wide variation in the presence of many nutrients, not one of these imitators had the same amount of nine essential nutrients in real milk,” said Beth Briczinski, NMPF’s vice president for dairy food and nutrition. “Some may add food-grade calcium salts or a few vitamins, but none matches milk’s complete nutritional profile. This discrepancy is about more than words; it’s a matter of the public being served nutritionally inconsistent, inferior products that desperately want to ride the coattails of and associate themselves with a superior food.”

The meeting also allowed NMPF to highlight the fact that FDA is out of step with its international counterparts, including Canada, the United Kingdom and the European Union. Each country actively polices improper labeling of imitation dairy products; Canada requires U.S.-based companies to change the wording on their labels to comply with the country’s own rules, for example, requiring that the product marketed as “almondmilk” in the United States be labeled as “almond beverage.” Meanwhile, the EU Court of Justice determined last month that products not sourced from an animal cannot bear the terms “milk,” “cheese” and so on.

“These countries prove that by actively enforcing standards of identity, dairy-free alternatives and real milk can co-exist without conflict,” said Mulhern. “We are not trying to eliminate the marketing of these foods. We want to end the consumer deception associated with these products and for FDA to enforce its regulations on product integrity. We will continue to push on this issue until FDA acts to ensure dairy standards are enforced.”