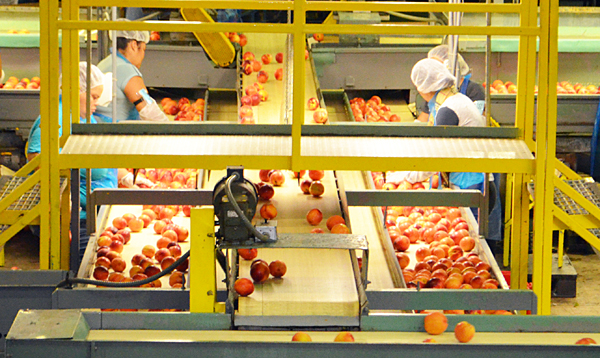 “Eastern Pro Pak maintains the very highest standards for the fruit distribution industry,” Secretary Fisher said. “The amount of Jersey Fresh peaches that flow through here demonstrates the peach production that takes place in the Garden State. Facilities like this give consumers all along the East Coast and Canada the opportunity to enjoy our super-delicious peaches. Our farmers produce high volume yields of the best quality.”

New Jersey was No. 2 in the nation in peach production value last year at $44 million. The USDA has projected New Jersey to harvest approximately 64 million pounds of peaches this year, which would be about an 8-million-pound increase from 2017.

“The expansion of the production facility was something that we really needed,” said Eastern Pro Pak General Manager Jeff Danner. “It’s already paying dividends with the amount of produce that we can distribute in a short amount of time. The fact that our equipment is state of the art is a tremendous asset to the members of the Jersey Fruit Co-op and others who supply us with their produce.”

The peach season for New Jersey lasts through the end of September. There are approximately 80 peach orchards in New Jersey with growers producing more than 100 different types of peaches. About 90 percent of those peaches are the yellow and white varieties.

Millennials are buzzing about beekeeping