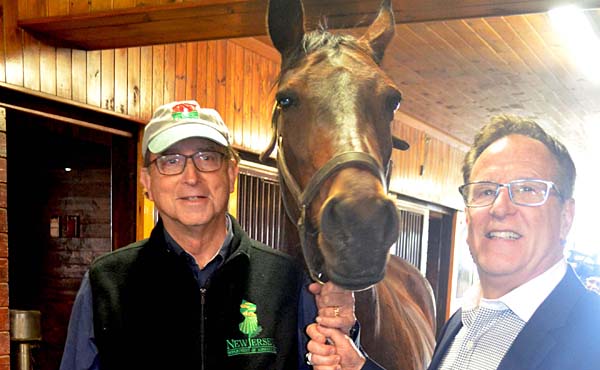 FLEMINGTON, N.J. — New Jersey Secretary of Agriculture Douglas H. Fisher and other state and local officials highlighted the horse breeding industry in New Jersey with a visit to Deo Volente Farms in Hunterdon County. The farm, like other horse breeding operations, is in the middle of foaling season, which is more active this year due to the addition of $20 million per year for horse racing purses for the next five years.

“Horse racing has a storied tradition here in New Jersey and it’s wonderful to see Deo Volente Farms, and other horse operations like this one, becoming a destination for horse breeders again,” Secretary Fisher said. “The additional purse money is already having a positive effect on the industry with the amount of Standardbred breeding increasing by nearly 60 percent from two years ago. We expect the number in New Jersey-bred horses to continue to rise in the coming years.”

According to the New Jersey Horse Racing Commission annual report, New Jersey remains a leader in Harness Racing in the region as more than $1.2 million was wagered in 2017, well ahead of the surrounding states.

Also, in anticipation of the purse increasing, the number of Standardbred horses bred in New Jersey has risen from 279 in 2017, to 435 in 2018 to an expected more than 700 this year.

“It is wonderful to see the horse racing industry on the upswing in New Jersey again,” Deo Volente Farms CEO Mike Gulotta said. “The additional purse money is already making a significant positive impact on our industry and it is also having a direct effect on other sectors that provide services to horse racing facilities and farms.”

Deo Volente Farms’ broodmares and stallions include victories in the many of the prestigious races in harness racing, including the Breeders Crown, the Little Brown Jug, the North America Cup, the She’s A Great Lady Stakes, the Three Diamonds, the Canadian Pacing Derby and numerous other top events.

Deo Volente Farms is a 160-acre facility and its services include boarding, stallion and foaling and sales.