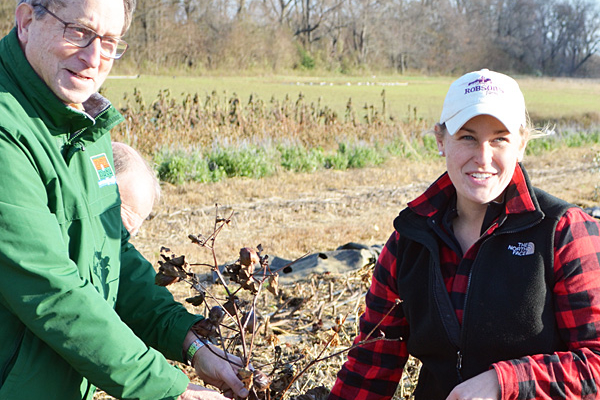 WRIGHTSTOWN, N.J. — New Jersey Secretary of Agriculture Douglas H. Fisher highlighted Jersey Fresh late season crops with a visit to Robson’s Farm in Wrightstown to emphasize that locally-grown produce and other farm products remain available in farmers markets and stores around the state.

Secretary Fisher and other guests took a walking tour of several fields in the primary growing areas of Robson Farms.

“Many of our farmers have had a great year with various crops and just because it’s November and Thanksgiving is approaching we want to remind everyone that Jersey Fresh produce is still available,” Secretary Fisher said. “We want our farmers to finish off a strong year and people to finish off the season with the great taste of Jersey Fresh produce throughout the state. It’s good to buy local because you know you are getting the best wholesome food, but it also helps the local economy.”

New Jersey ranks in the top 10 in the production of several crops, including sixth in the nation in squash production, which is one of the many late-season crops. The 2016 squash crop for New Jersey was valued at $13.7 million.

Other crops with a late harvest that are available include kale, sweet potatoes, white potatoes, radish, cabbage, cauliflower, cranberries, apples and turnips. For regular updates on the availability of Jersey Fresh farm products, consumers are encouraged to consult the Department’s weekly “Jersey Fresh Availability and Forecast Report” published on Monday afternoons throughout the growing season. The weekly report can be accessed at http://jerseyfresh.nj.gov/find/JFAvailReport.pdf.

“We have had an excellent season and it has been great to see all our work come to fruition with the recent harvest,” said Robson’s Farm owner and operator Rose Robson. “We continue to have loyal customers and appreciate the new ones who come here to sample and buy the new and different produce we grow. We look forward to seeing members of our community all year long.”

Robson’s Farm is a fourth-generation orchard fruit, vegetable and cut flower farm. Rose Robson’s father, Neil Robson, passed away in 2006 and while the large farm was sold, 40 acres of the original farm were kept. In 2013, after a career in pharmaceutical sales, Rose Robson returned home to continue the family farming tradition. Robson also keeps an up to date blog at www.robsonsfarm.com.

“It’s been such a rewarding experience to come back and be a part of a such a wonderful community and a great industry,” Robson said. “I really like interacting with people and seeing them enjoy Jersey Fresh produce and our Jersey Grown items, too.”

Along with a variety of produce, Robson’s Farm also grows and sells cut flowers and gives customers the opportunity for pick your own flowers. Rose Robson also teaches classes on how to make evergreen and floral wreaths and fruit blocks, which are similar to wreaths, but contain real fruit.

Robson’s Farm also participates in different Farmers’ Markets and has a Market CSA, where customers can have a debit account with the farm that can be used at the tailgate market or on the farm’s Purple Farmstand, which is open Thursday-Saturday during the summer months.