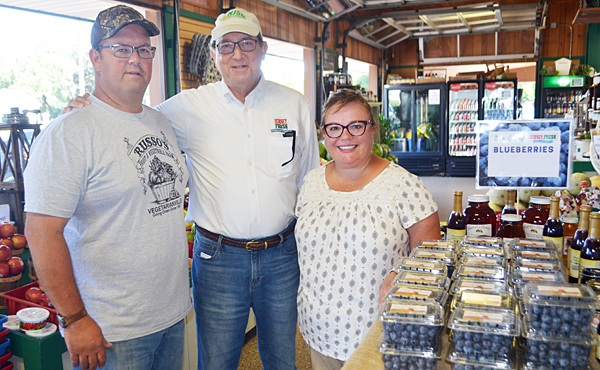 Secretary Fisher, middle, with Russo's Fruit and Vegetable Farmer owners Anthony and Melissa Russo next to the Jersey Fresh blueberry display in their farm market in Tabernacle. (New Jersey Department of Agriculture)

“Blueberries are one of the primary crops in New Jersey as the Garden State is famous for growing this fabulous fruit,” Secretary Fisher said. “Blueberries are for sale now at farm stands, supermarkets and farmers markets. They taste great by themselves, or they can be used in a variety of recipes.”

Blueberries were the No. 1 crop in New Jersey for 2018 with a production value of more than $62 million. New Jersey annually ranks in the top six in the U.S. in the production of blueberries. Farmers in the Garden State harvested 44 million pounds of blueberries on 9,000 acres last year.

“The blueberries are looking great this year,” said Anthony Russo, who owns and operates Russo’s Fruit and Vegetable Farm with his wife Melissa. “You can tell people in this area love blueberries because when we put them on the shelf here or take them to the Trenton Farmers Market they go quickly.”

The Russos have been farming in New Jersey since 1940 and currently have about 700 acres. They sell a variety of fruits and vegetables throughout the season and this year are growing 20 acres of blueberries. Russo’s Fruit and Vegetable Farm also features pick your own apples and pumpkins later in the season as well as wagon rides and corn mazes in the fall.

The blueberry season for New Jersey lasts through the end of July. During the peak of blueberry season, production can be as high as 250,000-300,000 crates per day. Eating blueberries is beneficial to health as they are known as the “King of Anti-Oxidants.” Blueberries are low in calories and high in nutrients.

Go to www.FindJerseyFresh.com to find recipes with Jersey Fresh blueberries and to see where they are available locally.

DFA is focused on driving innovation

Stories from Extension: Back to the Future of NJAES Storytelling
February 23, 2020

NJDA to highlight farmers in farm to school activities
January 28, 2020