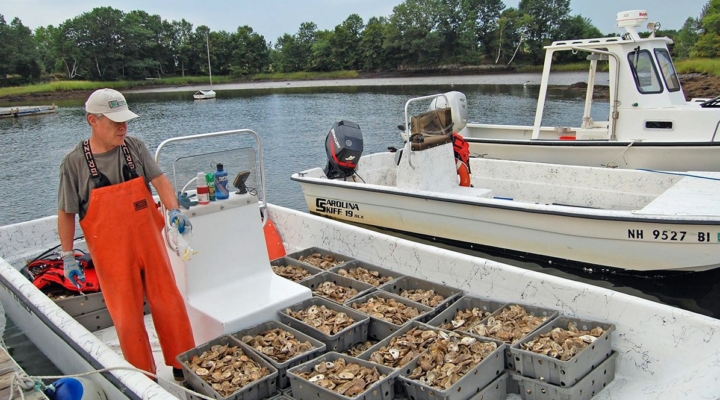 Working with existing and prospective farms as well as regulatory agencies, New Hampshire Agricultural Experiment Station researcher Ray Grizzle began conducting research to expand the state’s oyster farming industry about 10 years ago. According to new data released by the USDA in the 2017 Census of Agriculture, New Hampshire has 32 commercial mollusk operations representing $419,000 in sales. (Courtesy Photo)

DURHAM, N.H. — New Hampshire’s commercial oyster farming industry is strong and growing, with the substantial growth potential to increase production, according to a researcher with the New Hampshire Agricultural Experiment Station at the University of New Hampshire.

Working with existing and prospective farms as well as regulatory agencies, Grizzle began conducting research to expand the state’s oyster farming industry about 10 years ago. When he began, New Hampshire had only two licensed oyster farms. On average, it takes about three years to go from small “seed” oysters provided by hatcheries to market size, which creates a lag for oyster farmers beginning commercial production.

“The growth of oyster farming in the state is strong, and likely to continue for quite some time. Overall oyster production is only a small fraction, perhaps 10 percent, of what it could be. The total number of farms and their areal coverage is probably nearing maximum for the Little Bay area, but production is not,” Grizzle said.

He points to data from New Hampshire Fish and Game to show the growth potential for the industry. In 2013, four New Hampshire farms together reported harvesting 81,274 oysters. Last year, 11 farms sold 439,497 oysters. However, there were 26 licensed oyster farm sites in the state in 2018, indicating that most have not begun to sell oysters yet.

“Most farms are still small with respect to production, some with just the owner doing all or most of the work. The ones that have been in existence for more than five years, however, have evolved substantially to include employees, improved farming methods, and marketing networks that involve wholesalers as well as directly selling to local chefs. New Hampshire oysters are regularly featured at local raw bars and are shipped to other states in the region and elsewhere,” Grizzle said.

Grizzle sees several opportunities to grow the state’s oyster farming industry, which will require farmers, regulatory agencies, and those involved in marketing to work together. He said average annual production per farm is still quite low when compared to the more mature industries in Massachusetts and Maine. Thus, most growth in the near-term likely will come from individual farmers increasing their production.

“There may also be opportunities for expanding from bottom gear such as the commonly used ‘racks-and-bags’ to surface gear or perhaps raft culture. This would allow farmers to move into deeper waters. Overall, the industry will hopefully evolve in a positive manner along with changes in farming methods, marketing opportunities, and regulatory management,” Grizzle said.

Chef Jeremy Sewall, owner of Row 34 in Portsmouth, has served local oysters at his restaurant since it opened in 2015. “New Hampshire oyster farmers grow very high-quality oysters.  As the water changes with the seasons, so does the flavor of the oysters. It can be subtle or obvious. New Hampshire oysters have a great flavor that makes them different from oysters grown in other New England states,” he said.

The chef said the quality of New Hampshire oysters has improved in recent years as farmers have perfected their farming systems. “Ray is a pioneer in developing the oyster farms in New Hampshire. Without him, New Hampshire would be years behind were it is, in both quality of oysters and the benefit they bring to the water and the community,” Sewall said.

“Growing food takes a lot of hard work and dedication. Supporting local fisheries and aquaculture is important to us. By supporting them, we can keep locally grown food in our community and help the oyster farming industry. It is a big win for everyone, including the guests at our restaurant,” he said.

In addition to working to expand oyster farming, Grizzle and his team are looking at the role of oyster farms in providing “ecosystem services” such as water filtration and habitat for other species. This recent research involved three New Hampshire farmers and several UNH students, was supported by NH Sea Grant and the NH Agriculture Experiment Station.

Grizzle’s oyster research began 20 years ago with efforts to restore wild oysters. That early work, in partnership with the NH Department of Environmental Services and the NH Fish and Game Department, was experimental and small-scale. While it still is experimental, it has expanded in scale, now with each project typically involving a few acres. Recently, the restoration effort expanded to involve more oyster farmers thanks to funding from The Nature Conservancy and USDA’s Natural Resources Conservation Service.

“The partnership of oyster farmers with those working on restoring wild oyster populations makes a lot of sense, and it has the potential to become an important win-win situation for all involved,” he said.

According to The Nature Conservancy in New Hampshire, the eastern oyster has historically played a vital role in the ecology of Great Bay Estuary. As many as 1,000 acres of live oyster reef may have covered the estuary in 1970, but more than 90 percent of oysters were lost due to pollution, harvest, and disease. Without oysters, Great Bay Estuary is lacking the natural filtration capacity to maintain healthy eelgrass beds and fish nurseries as nitrogen and siltation increase.

UNH and The Nature Conservancy, together with other partners, have successfully restored more than 18 acres of reef and 3.5 million oysters to the system since 2009. In recent years, the team has scaled-up efforts, with as much as five acres and 1 million oysters restored annually.

“The oyster is, in many, ways a remarkable species. What other creature in our estuaries filters the water, builds large reefs that provide habitat for many other species, supports recreational and commercial fisheries, is now grown on farms throughout its range, and tastes good?” Grizzle said. “Oyster farming is a rapidly growing industry in New Hampshire, and it is occurring in one of the state’s most treasured waterways: The Great Bay estuarine system. Those interested in the economic as well as environmental health of the state should pay attention.”

This material is based upon work supported by the NH Agricultural Experiment Station, through joint funding of the National Institute of Food and Agriculture, U.S. Department of Agriculture, under award number 1013469, and the state of New Hampshire. This research also has been supported by USDA’s Natural Resources Conservation Service, U.S. Environmental Protection Agency, National Oceanic and Atmospheric Administration, NH Department of Environmental Services, NH Fish and Game Department, The Nature Conservancy, and the Piscataqua Region Estuaries Partnership.

Founded in 1887, the NH Agricultural Experiment Station at the UNH College of Life Sciences and Agriculture is UNH’s original research center and an elemental component of New Hampshire’s land-grant university heritage and mission. We steward federal and state funding, including support from theUSDA National Institute of Food and Agriculture, to provide unbiased and objective research concerning diverse aspects of sustainable agriculture and foods, aquaculture, forest management, and related wildlife, natural resources and rural community topics. We maintain the Woodman and Kingman agronomy and horticultural research farms, the Macfarlane Research Greenhouses, the Fairchild Dairy Teaching and Research Center, and the Organic Dairy Research Farm. Additional properties also provide forage, forests and woodlands in direct support to research, teaching, and outreach.

USDA will not include wild blueberries in program