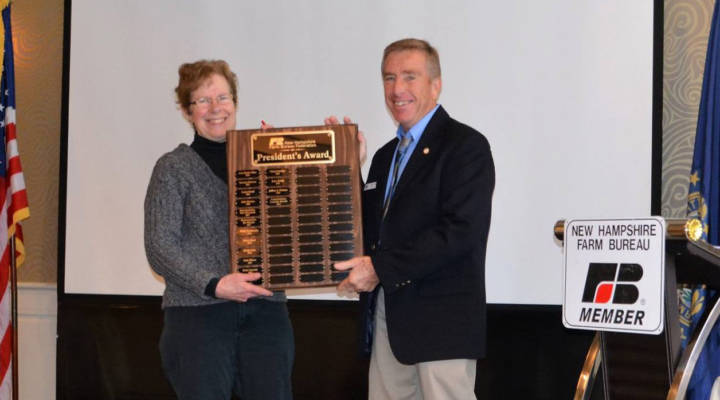 Merrill has served as Commissioner of Agriculture for the last 10 years and has been a stalwart advocate, marketer, and ally for agriculture in New Hampshire. She is also a third-generation dairy farmer and worked as a freelance agricultural journalist for many years prior to being appointed Commissioner. 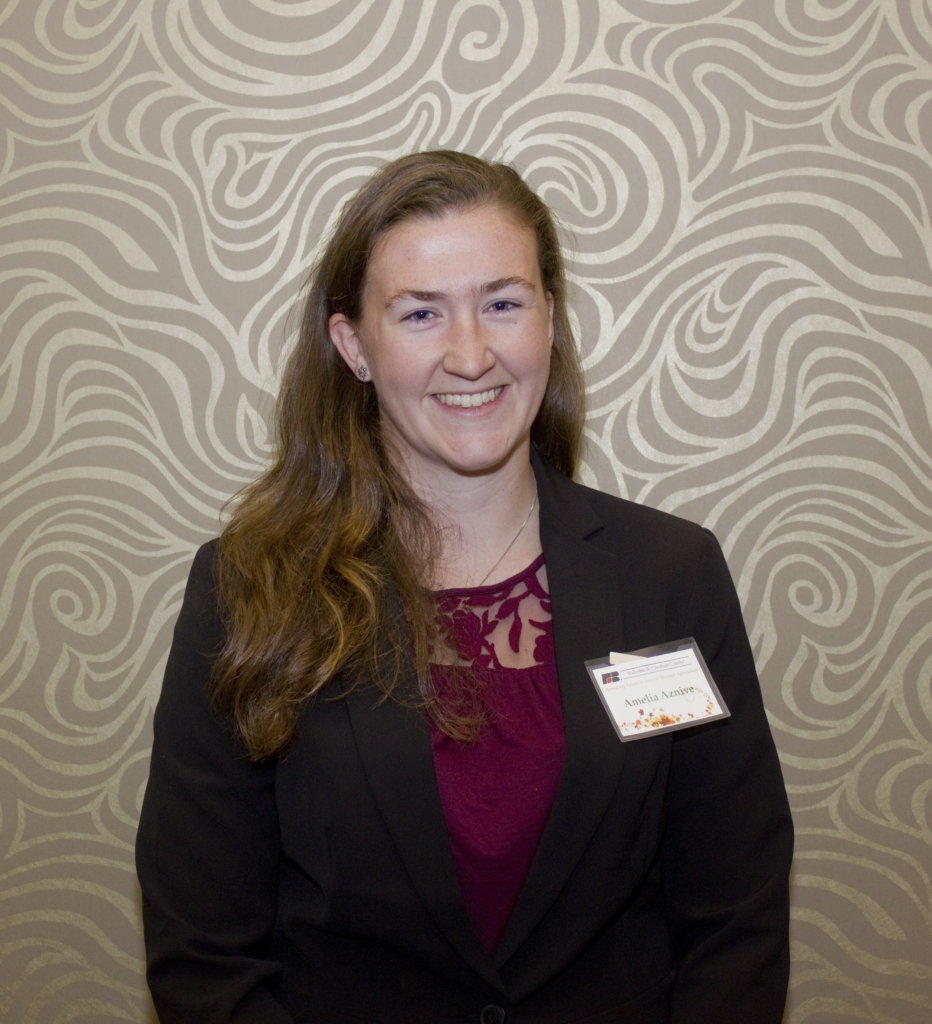 Amelia Aznive of Concord, NH was named the winner of the 2017 NHFB Young Farmer Discussion Meet. Competitors in the Discussion Meet prepare thoughts and opinions on various subjects facing agriculture and cooperatively work towards a solution.

The goal of the Discussion Meet is to develop leaders for effective problem solving through group discussion, similar to the organization’s grassroots policy development process. The competition provides an opportunity for Young Farmers to build basic discussion skills, give and receive criticism in a helpful manner, develop an understanding of important issues, explore and pool knowledge to reach consensus, and solve problems.

Amelia is from Concord, NH and owns Chakawana Farm where she has a small apiary, registered Saanen Goats, and is building a Brown Swiss herd. She currently serves on the Board of Directors of the NHFB Young Farmers, is Secretary of the Ossipee Valley Agricultural Society, and is a 4-H volunteer. She also competes in timbersports competitions.

Glen Putnam of Piermont and Ammy Rice of Rochester also participated in this year’s competition. 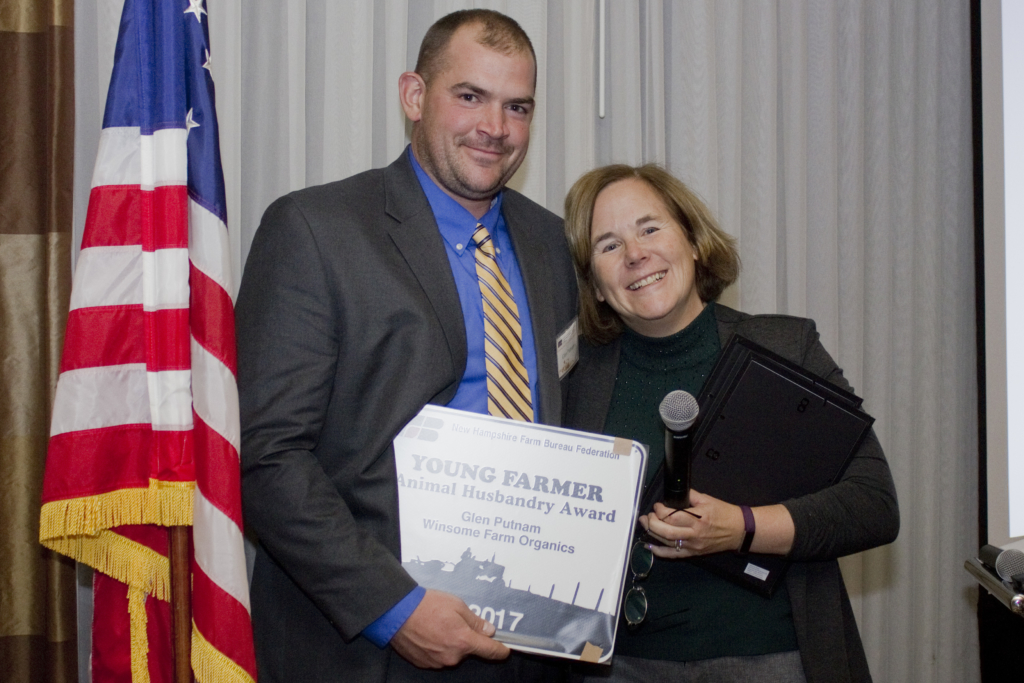 The Animal Husbandry Award has been developed by the New Hampshire Farm Bureau Federation Young Farmer program to promote sound animal husbandry and to recognize individuals who have implemented exceptional livestock welfare practices on their farm. Candidates for this award are nominated by their fellow Young Farmers and the judging is based on a set of criteria, including best management practices.

In addition to winning this year’s Animal Husbandry Award, Glen was also recognized for winning the NHFB membership competition for recruiting the most new members over the course of the year. 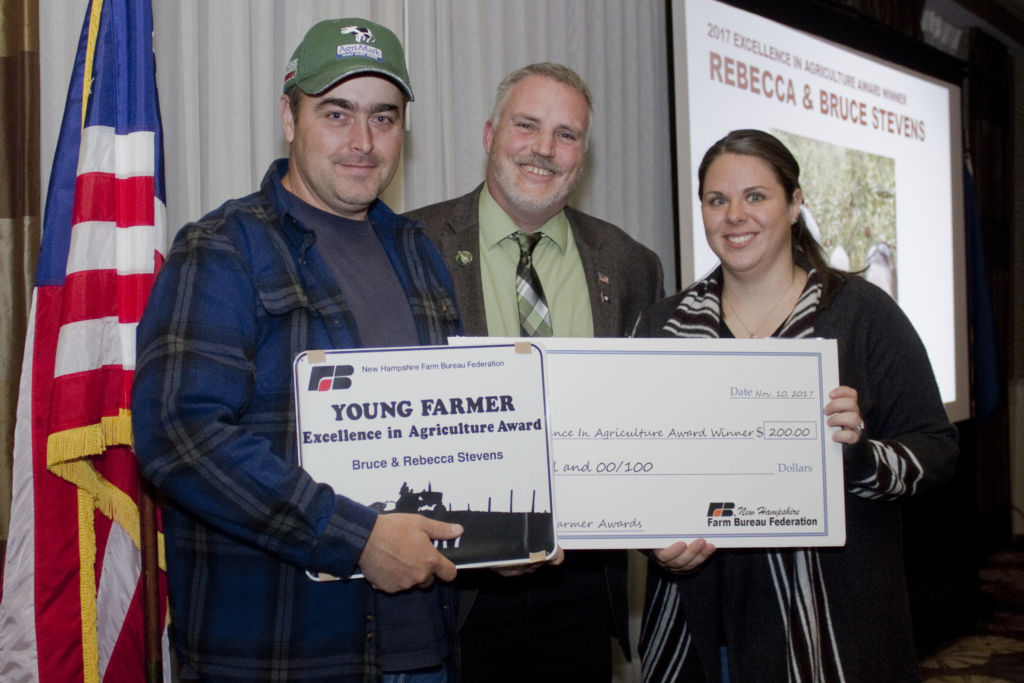 The 2017 NHFB Young Farmer Excellence in Agriculture Award was given to Bruce & Rebecca Stevens of Epsom, NH. The award acknowledges the efforts of Young Farmers who do not derive the majority of their income from farming, but are actively contributing to agriculture and to their community.

Bruce & Rebecca Stevens have a small farm in Epsom raising beef cattle and hay. Rebecca became involved with FFA while attending Coe-Brown Northwood Academy winning numerous awards and serving as chapter Vice-President. She was instrumental in the formation of the school’s FFA Alumni Chapter and served two terms as President. Bruce gained experience in agriculture working for local dairy farms and eventually started working for Dairy Farmers of America as a milk truck driver. He now owns his own commercial trucking company. Rebecca has served on the Merrimack County Farm Bureau Board of Directors for many years and is currently serving her first term as President.

The Stevens will move on to compete with other Excellence in Agriculture Award winners from across the country at the American Farm Bureau Annual Convention in Nashville, Tennessee this January.

A panel of judges consisting of State Representative and farmer Howard Pearl, Michael McPhail from Farm Credit East, and Becky Nelson of Beaver Pond Farm selected the Stevens from among three nominees. Also nominated for the award were Amy Matarozzo of Center Barnstead and Daimon Meeh of Brentwood. 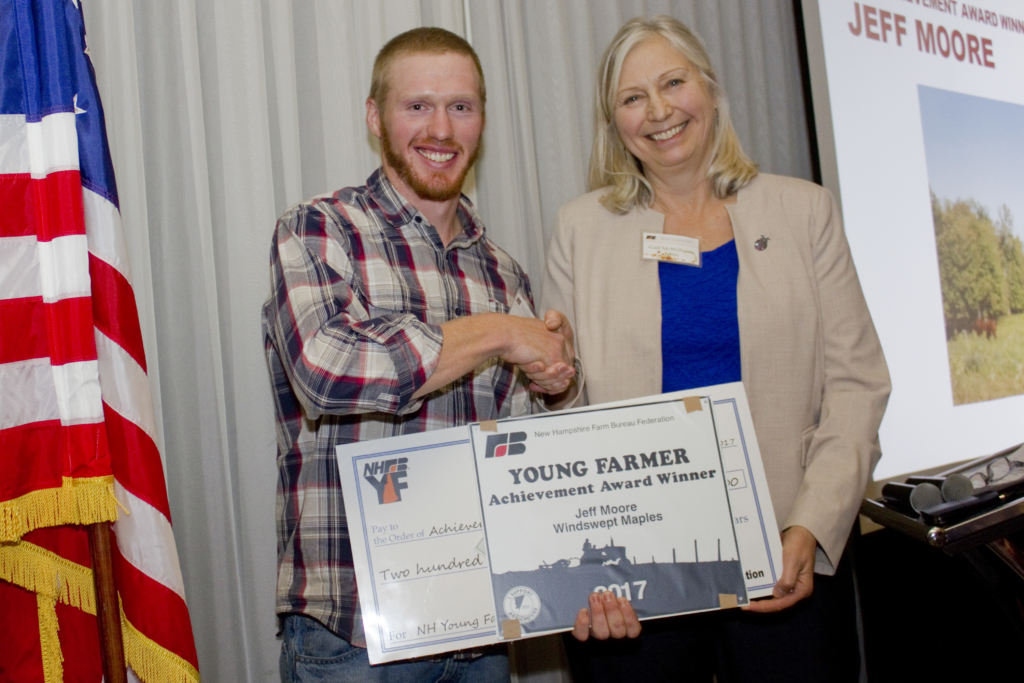 Jeff Moore is part of the eighth generation of Moore’s to farm on the family’s diversified farm in Loudon. Their major enterprises include maple, hay, pastured beef & lamb, and retail egg and vegetable production. The maple operation is multi-faceted; including 8,500 tapped trees, retail syrup and maple equipment sales, and sugar bush custom installation services. Jeff works closely with his family on the farm but has been increasingly taking ownership of new land and utilizing new technology to increase efficiency. In his spare time, Jeff plays basketball in several local leagues.

As part of the award Jeff will receive the use of a new Kubota tractor for six months or 250 hours from Pinnacleview Equipment in Walpole. He will also move on to compete in the national Achievement Award competition at the American Farm Bureau Annual Convention in Nashville, Tennessee this January.

A panel of judges consisting of State Representative Dick Gordon, Brandon Coffman of Farm Family Insurance, and NH Department of Agriculture Director of Agricultural Development Gail McWilliam Jellie travelled across the state visiting nominee farms to make their decision. Also nominated for the award were Dan Hicks IV of Sunnycrest Farm in Londonderry and Jason McNamara of McNamara Dairy in Plainfield. 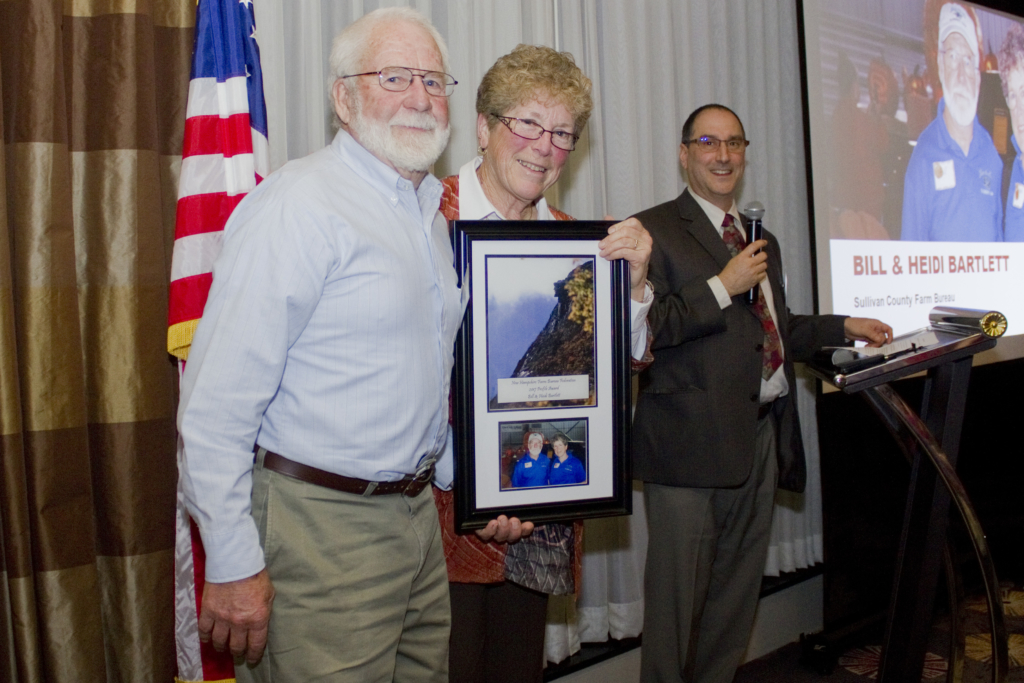 The 2017 Profile Award was presented to Bill & Heidi Bartlett of Bartlett Blueberry Farm in Newport, NH. Bill & Heidi Bartlett purchased what is now Bartlett’s Blueberry Farm in Newport in 1985 and have continued its growth as a successful farm and business for over 30 years. Beyond that, their contributions to the community have been just as important as their dedication to agriculture.

The Bartletts care for about 5 acres of blueberry bushes containing 15 varieties and sell their entire product directly to customers through pick-your-own. In addition to improving production through the use of drip irrigation and new varieties, the couple has expanded their business to include a blueberry netting enterprise where they sell netting and provide technical assistance to other blueberry farmers. Their farm is often host to twilight meetings and other educational events and with the 2001 NH Farm of Distinction Award by the NH Department of Agriculture, Markets & Food.

Both Bill & Heidi have been active Farm Bureau members for over 45 years. Bill served on the Sullivan County Farm Bureau Board of Directors for close to a decade. Both of them have taken time to help prepare Farm Bureau activities at the Cornish Fair despite it being their busy season and have dedicated time to serve their town, their church, and the farm community.

Their efforts and attitudes can be summarized by the sign that welcomes people to their farm, “Do the best that you can in the place where you are, and be kind.” Congratulations Bill & Heidi Bartlett!