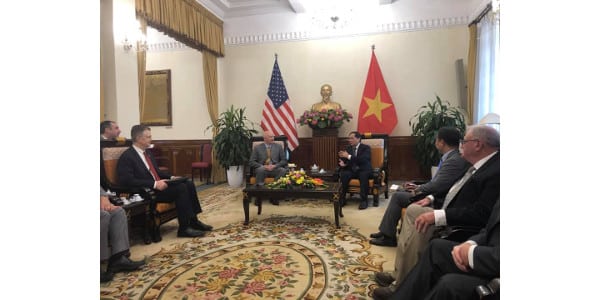 LINCOLN — The Nebraska Grain Sorghum Board (NGSB) praised the announcement that Vietnam will resume importation of sorghum beginning on May 1st, 2020. Vietnam boasts the world’s fastest-growing economy, expanding at a rate of 8%-10% year over year for the past decade.

NGSB staff participated in Governor Ricketts’ trade mission to the country in September 2019, working alongside Nebraska Department of Ag leadership, USDA Plant and Animal Health Inspection Service (APHIS) staff, the U.S. Embassy in Vietnam, and US Grains Council representatives in Southeast Asia to encourage Vietnamese acceptance of APHIS-proposed phytosanitary protocols respective to sorghum. NGSB also thanks the United Sorghum Checkoff, Sorghum Growers and many other sorghum-focused organizations also contributed to the approval of the phytosanitary agreement for sorghum importation by the Vietnamese government.

“Increasing value-added markets for sorghum, whether at home or abroad, is critical to the success of Nebraska sorghum growers, said Nate Blum, Executive Director of the Nebraska Grain Sorghum Board. “From bioplastics and ethanol to aquaculture and animal feed, Vietnam offers many opportunities for this great Nebraska product.  We are eager to further strengthen our relationships with end-users in Vietnam over the coming years.”

Blum continued, “Many agencies and individuals worked on reopening the Vietnamese market. The Nebraska Grain Sorghum Board especially thanks U.S. Ambassador Kritenbrink, Governor Ricketts, the Ministry of Ag and Rural Development (MARD) in Vietnam, the United Sorghum Checkoff Program, the U.S. Grains Council, USDA APHIS, and the U.S. Embassy staff for their diligent work to resolve this fundamental markets access issue.”

For additional information, producers are encouraged to contact the Nebraska Grain Sorghum Board at: 402-471-4276 or by email at: sorghum.board@nebraska.gov

The Nebraska Grain Sorghum Board administers the one-cent per hundredweight checkoff, which is assessed on all grain sorghum sold in the state.  The Board’s annual budget is allocated in the areas of research, market development, and education.