Home / California / NFU honors 26 Congressional champions of ag
A new user experience is coming! We'll be asking you to login to your Morning Ag Clips account March 1st to access these new features.
We can't wait to share them with you! Read more here. 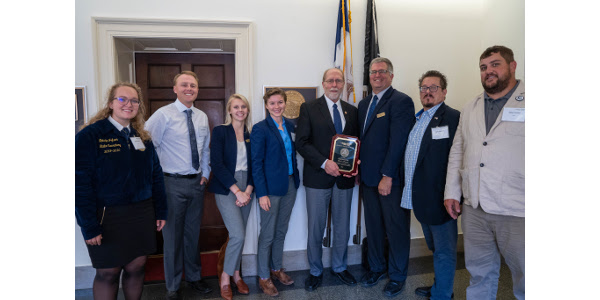 The Golden Triangle Award, the family farm organization’s highest legislative honor, was presented to each recipient this week during NFU’s Fall Legislative Fly-In. (Courtesy of IFU)

The Golden Triangle Award, the family farm organization’s highest legislative honor, was presented to each recipient this week during NFU’s Fall Legislative Fly-In.

“The Golden Triangle Award recognizes farm and food champions in Congress that display outstanding leadership on the issues that are important to both our industry and our organization. We’re appreciative of their insight and devotion to securing the nation’s food supply for the good of both American family farmers and consumers,” said NFU President Roger Johnson.

The Golden Triangle, first presented in 1988, symbolizes the core principles of the Farmers Union organization: education, cooperation, and legislation. This year’s Golden Triangle honorees were selected for their leadership and dedication to improving the livelihoods of family farmers and ranchers.

“It was an honor for IFU to provide our long-time friend, Congressman Dave Loebsack with the Golden Triangle Award,” said IFU President Aaron Heley Lehman. “Congressman Loebsack has been a champion of Iowa agriculture, always demonstrating support for Iowa family farmers in his policy decisions. We are thankful for his history of leadership and support on impactful agriculture issues.”

The 2019 recipients of the Golden Triangle Award are:

About Iowa Farmers Union: Iowa Farmers Union is a grassroots member organization of family farmers and ranchers, advocates, and consumers committed to promoting family agriculture in Iowa. Since 1915, Iowa Farmers Union members have worked together to strengthen the independent family farm through education, legislation and cooperation and to provide Iowans with sustainable production, safe food, a clean environment and healthy communities.