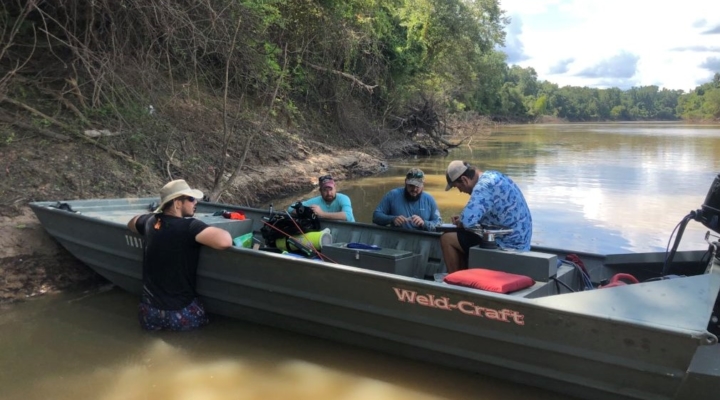 “The discovery of the new mussel species Lampsilis bergmanni, Guadalupe Fatmucket, came out of a larger effort to better understand species’ boundaries for rare and common mussels throughout the state,” said Charles Randklev, Ph.D., Texas A&M AgriLife Research scientist with Texas A&M’s Natural Resources Institute, NRI. Randklev, who is based in Dallas, works with the Freshwater Mussel Program of the NRI and Texas Water Resources Institute.

Randklev said the discovery of L. bergmanni is important because it shows that boundaries for many species in Texas are not well defined and resolving them is critical to making sure conservation status assessments are evidence-based and accurate.

A research paper related to its discovery can be found at https://tinyurl.com/L-Bergmanni.

Randklev noted the contributions of Kentaro Inoue with the Shedd Aquarium in Chicago, John Harris with Arkansas State University, Clinton Robertson with the Texas Parks and Wildlife Department, and Nathan Johnson with the U.S. Geological Survey toward the discovery of L. bergmanni as a separate mussel species.

In a separate effort, Chase Smith and Robert Doyle, Baylor University, along with Johnson, Inoue and Randklev, identified another new species, Potamilus streckersoni, or the Brazos Heelsplitter. They discovered this new species in the Brazos River basin using a similar molecular and morphological approach.

“Most of the original taxonomical work for freshwater mussels in Texas is based only on external share characteristics,” Randklev said. “But the application of modern molecular tools combined with comprehensive sampling throughout the state has provided opportunities to reexamine species boundaries, which will help aide in the conservation and management of mussels.”

Declining mussel populations serve as a barometer “for the overall health of freshwater ecosystems,” where they contribute a number of important functions, including filtration, said NRI director Roel Lopez.

“Mussels are considered our ‘canary in the coal mine,’ letting us know when ecosystems aren’t healthy,” he said.

“Aspects of the Freshwater Mussel Program include knowing the location of various mussel populations and monitoring them, as well as determining what environmental factors may be having an impact on those populations,” Lopez said. “We also want to ensure mussels are properly identified and develop models to predict what may eventually happen to mussel populations.”

For example, L. bergmanni was originally thought to be part of a population of Lampsilis bracteata, Texas Fatmucket, which is endemic to Central Texas and is being reviewed for listing under the U.S. Endangered Species Act, or ESA.

Based on these findings, the range of L. bracteata has been reduced to only the Colorado River drainage, while L. bergmanni appears restricted to the upper Guadalupe River drainage.

“These changes mean that L. bracteata is likely rarer than previously thought and L. bergmanni may be vulnerable to environmental changes because it occurs within a relatively small geographical area,” Randklev said. “The latter is likely why U.S. Fish and Wildlife Service is now considering L. bergmanni for protection under the ESA.”

He said a similar situation is playing out for P. streckersoni, which appears to be restricted in its distribution, although the U.S. Fish and Wildlife Service has yet to consider this species for protection.

As another example, Lopez noted in October of 2011 the Service determined the smooth pimpleback and golden orb warranted listing under the ESA and they were placed on the candidate species list.

“However, further genetic studies in which Dr. Randklev was instrumental have shown those mussels are identical to the wide-ranging pimpleback, Cyclonaias pustulosa,” Lopez said. “As a result, they have determined those two mussel species should no longer be listed under the ESA and will now be removed from candidate status.”

Lopez said this further reinforces the importance of the work of Randklev and his associates in evaluating species for protection under the ESA and determining any associated conservation actions.