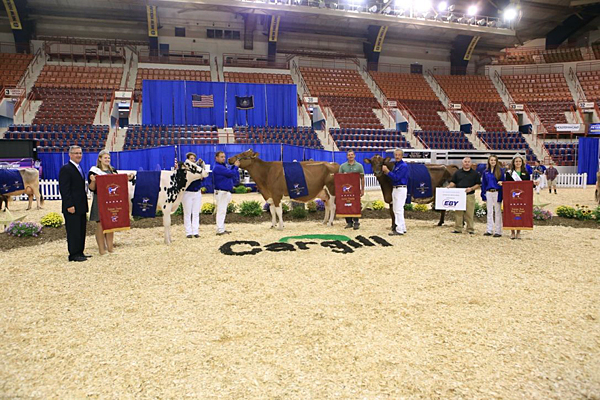 HARRISBURG, Pa. — Barbara Ziemba of Weedsport, N.Y., will receive the Image Award at the 54th All-American Dairy Show, set for Sept. 16-21, at the Pennsylvania Farm Show Complex and Expo Center in Harrisburg.

The Image Award is presented annually to an individual who has enhanced the image of the All-American Dairy Show with significant contributions to its reputation, prestige and welfare.

“Barb has been a dedicated fundraiser for the All-American Dairy Show. If not for her tenacity, the show wouldn’t have continued to grow and thrive over the past several years,” said Agriculture Secretary Russell Redding. “In this behind-the-scenes volunteer role, Barb has consistently represented the best interests of the show and built critical relationships with industry partners.”

Ziemba has served as the show’s sponsorship coordinator for six years. As someone who understands the needs of exhibitors and agribusinesses at a large dairy show, Barb has seen great success in her role, raising more than $500,000 in cash and donations. She finds it gratifying to give sponsors the platform to promote their businesses and enjoys finding creative ways to help them to support their clients and connect with potential customers.

“I am very grateful and humbled to receive the All-American Image Award, as there are many show supporters and key people who are instrumental in preparing for a successful event,” Ziemba said. “Being a part of the show has allowed me to build friendships with my sponsors, the board members, industry exhibitors, and cattle exhibitors.”

Ziemba owns multiple high pedigreed Holstein and Red and White cattle in partnership with her sons and other breeders.

Ziemba’s son Kevin, his wife Barb and their son Mason live in Durhamville, N.Y. Her son Tim, his wife Leah and their children Claire and Luke live in Cambridge, Wis.

Ziemba is a member of the New York and Wisconsin Holstein associations. She served on the New York Holstein board of directors for more than 15 years, also serving on the association’s membership committee.

Visit the newly-revamped www.allamerican.pa.gov for more details about the All-American Dairy Show. The event features 22 shows in six days, in addition to the nation’s only all-dairy antiques show. Last year’s show featured nearly 3,000 animals and 1,500 exhibitors from across the country.