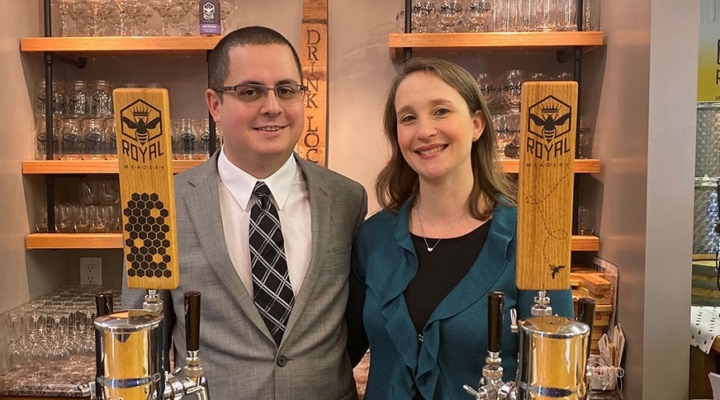 Royal Meadery is owned and operated by Gregory Wilhelm, who turned his passion for beekeeping and brewing into a thriving craft beverage manufacturing business in Albany. Gregory and his wife Kristen have a production facility and tasting room in Delmar, outside of Albany, and are dedicated to producing modern meads with locally produced honey to create a resurgence for the world's oldest fermented beverage. (Courtesy Photo)

“This administration continues its commitment to supporting the state’s growing craft beverage industry and the economic ripple effects that come with it,” Governor Cuomo said. “Creating the farm meadery license not only helps our local craft beverage producers, it creates jobs, promotes tourism and continues to support New York as a leading producer of honey in the Northeast.”

“Thanks to our tireless efforts to cut red tape, craft beverage manufacturers are thriving like never before in communities across the State,” Lieutenant Governor Kathy Hochulsaid. “We’re proud to welcome Royal Meadery as New York’s first farm meadery and applaud their success and use of locally-sourced honey. With this latest achievement the craft beverage industry continues to grow, creating job opportunities and boosting tourism in every region.”

Royal Meadery is owned and operated by Gregory Wilhelm, who turned his passion for beekeeping and brewing into a thriving craft beverage manufacturing business in Albany. Gregory and his wife Kristen have a production facility and tasting room in Delmar, outside of Albany, and are dedicated to producing modern meads with locally produced honey to create a resurgence for the world’s oldest fermented beverage.

Royal Meadery Owner Gregory Wilhelm said, “We appreciate the recognition of receiving the first farm meadery license.  New York has long been recognized for its exceptional honey production. It is only natural that New York leads the way in legislation around mead production. I commend the Governor and legislature in creating an environment which supports farms and the craft beverage industry.”

Mead, commonly referred to as “honey wine,” is an alcoholic beverage that is created by fermenting honey with water, which can be infused with fruits, spices, herbs and flowers. The new legislation, first proposed by Governor Cuomo in his Fiscal Year 2019 Executive Budget, authorizes the production of New York State labeled mead made exclusively with honey produced in the state.

The farm meadery license includes a host of privileges, including the ability to sell their products by the glass and by the bottle from their manufacturing facilities or tasting rooms, in addition to any other wine, beer, cider or spirits produced by a New York State farm manufacturer. Farm meaderies may also operate up to five no-fee offsite branch offices with tasting rooms anywhere in the state. These expanded privileges are credited with spurring New York’s current craft beverage boom, with 236 farm breweries opening following enactment of the Governor’s 2013 Farm Brewery law and 43 farm cideries since creation that license in 2014. The Capital Region alone has grown nearly 250% by adding 85 craft manufacturers since 2012. As with New York manufactured hard cider, New York mead will be sold in both grocery stores as well as liquor and wine stores. The annual cost for the new farm meadery license is $75.

State Liquor Authority Chairman Vincent Bradley said, “The new farm meadery license is another example of how this administration continues to make it easier for entrepreneurs to launch new manufacturing businesses to meet the high demand for New York produced products.”

State Agriculture Commissioner Richard A. Ball said, “Thanks to Governor Cuomo’s support of the craft beverage industry, New York’s business owners continue to innovate and produce unique wines, beers, ciders and spirits using New York agricultural products, providing an economic boost to our farmers.  With the launch of this first farm meadery, we celebrate the creation of a new license that will not only further grow the craft beverage industry in New York State but will also present new opportunities for our beekeepers and the state’s honey production.”

Senator Jen Metzger, Chair of Senate Agriculture Committee said, “Today we celebrate the first mead license issued in New York and the tangible momentum for farm meaderyexpansion across the state. I was so pleased to carry legislation in the Senate to make it easier for farm meaderies to thrive and prosper by bringing tax laws in alignment with other farm-brewed and distilled products like wine, beer, and cider. Mead is a delicious and growing segment of the craft beverage sector, and as the top honey producer in the northeast, New York is well poised to be the market leader. Here’s to seeing ‘honey wine’ in more Empire State tasting rooms.”

Senator Neil D. Breslin said, “Congratulations to the Royal Meadery in Delmar for receiving the first farm meadery license in New York State. I commend Governor Cuomo and the State Liquor Authority for supporting this new segment of the state’s craft brewing industry that is sure to benefit state wide agriculture and tourism.”

Assemblymember Patricia Fahy said, “I’ve been thrilled to champion and pass legislation to support New York State’s craft beverage industry, so I’m excited to see local Royal Meadery in Delmar receive the state’s first-ever meadery license. Growing the craft beverage industry means growing local jobs, growing small business start-ups and small farms, driving tourism, and stimulating the local economy. I commend the Governor for his leadership on this issue and will continue to work in the state legislature to support New York’s agricultural businesses and make it easier for craft beverage producers to do business, especially here in the Capital Region.”

Albany County Executive Daniel P. McCoy said, “Having the first farm meadery license here in Delmar adds to the unique nature of this community, and today’s announcement underscores the importance of agriculture, a healthy bee population and the craft beverage industry for the upstate economy. In 2017 alone, over $47 million worth of agricultural products were sold out of Albany County, and thanks to the Governor’s and the State Legislature’s leadership, that number is sure to grow as more of these businesses set up shop.”

Recognizing the value that craft producers have for not just their own businesses, but for the State’s entire economy, Governor Cuomo has worked to create new licenses, modernize laws, relax regulations, cut taxes, eliminate fees and launch innovative promotional campaigns to make it easier to start and grow new craft manufacturing businesses.  Since the Governor’s first Wine, Beer and Spirits Summit, the number of farm-based licenses has increased by over 179% during, from 282 in October 2012 to 788 today.

New York now ranks in the top five in the U.S. for its number of craft beverage producers in every category. The state ranks first in U.S. for the number of hard cider producers, second in craft distillers, third in breweries, and fourth in the country for the total number of wineries.  New York remains the top honey producer in the Northeast, with the total value of honey produced at $9.6 million in 2017, an increase of nearly 80 percent from 2011.

To apply for a farm meadery license, please visit: http://www.sla.ny.gov.