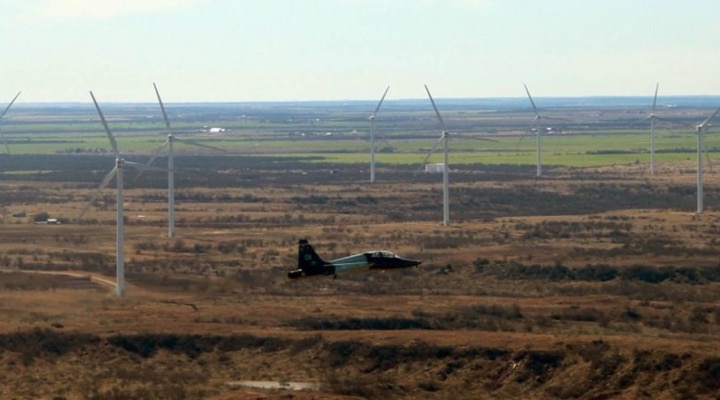 COLLEGE STATION, Texas — The Texas A&M Natural Resources Institute (NRI), in collaboration with the Texas Military Preparedness Commission (TMPC) within the Office of the Governor, Department of Defense Office of Economic Adjustment (OEA), and with input from the American Wind Energy Association (AWEA), launched the Texas Early Notification Tool (TENT). This is a new web tool designed for developers, namely those in the wind energy industry, to use for early screening of potential project sites and to identify potential issues that should be evaluated by the military. Funded by OEA with matching funds from TMPC, this tool facilitates early stakeholder communication between military installations, industry, and military communities avoiding development that may impede military training and readiness missions, specifically related to aviation.

Texas is home to valuable land and air assets used to train our military forces, with 15 active military installations accounting for approximately 1.5 million acres across the state. Each installation has sizable impacts on our nation’s military readiness, the state’s work force, and the economy, generating at least $101.6 billion in economic activity each year, per the Texas Comptroller of Public Accounts in 2017. The wind industry is also a vital component to the Texas economy, ranking first in the nation for existing wind production and investing over $46 billion across the state through 2018. Wind turbines are built outside military fence lines but can still pose potential adverse impacts to low-level airspace, radars, and other aviation systems used in flight training missions if not sited in coordination with the military.

Given recent growth of the wind energy industry in Texas, along with the prevalence of military installations with aviation missions in the state, land-use compatibility is a common concern for both groups. Early engagement between military and industry stakeholders offers a proactive solution to ensuring compatible development. NRI’s technical expert, retired Navy Captain Tony Parisi, led the effort to update and expand on the institute’s 2010 Wind Energy and Military Airspace in Texas report, which described the status of wind energy development in the state and its proximity to military aviation facilities. “This project is exciting for many reasons; above all, we were able to find a mutually beneficial balance for all parties involved by facilitating a new conversation between the wind industry and military to advance energy development while protecting the military mission,” said Roel Lopez, Director of NRI.

As the report notes, “There are many examples of projects that could have impacted military readiness, but the impacts were mitigated through collaboration between the developers and DoD or abandoned when there were no viable mitigations.” The updated report captures current wind energy development in Texas and describes early notification areas based on radar line-of-sight, proposed location within particular low-level airspace, or within certain proximity to military installations. To complement the report, NRI developed a publicly available web tool that enables industry and other stakeholders to assess potential project locations in light of military mission compatibility and provide users with military points of contact to facilitate initial contact. As described in the report and on the website, the tool is “not for the designation of exclusion areas”, but rather is for “preliminary evaluations and early outreach.” The report makes clear that the tool does not replace the need for project-specific evaluations via DoD’s Military Aviation and Installation Assurance Siting Clearinghouse and the Federal Aviation Administration.

“Wind farm developers have a long history of successfully working with the military to ensure compatibility with military training and operations,” said Tom Vinson, VP of Policy and Regulatory Affairs, American Wind Energy Association. “Deployment of tools like this that help facilitate continued coordination should only improve the win-wins that result for national security and economic security.”

Stakeholder collaboration was a major focus in the development of both products. NRI hosted several meetings and workshops with military, industry, and military community representatives to define the criteria needed to develop a useful planning tool. In August, these representatives participated in a wind farm tour and got an in-depth look at what goes into planning a wind turbine site and construction. Similarly, participants toured Sheppard Air Force Base (AFB) aviation facilities, getting to observe planes and associated equipment up-close and hear a briefing about the aviation training conducted at Sheppard AFB.

The report and web tool were made available in a beta version to targeted stakeholders for testing late this summer and have received positive feedback. The tool is now being rolled out publicly. The web tool allows users to create custom queries based on their area of interest. If the area selected intersects a military asset notification area, the user has the option to generate a printable report that includes an area map and point of contact information for the appropriate military personnel associated with that asset. The web tool also allows users to download data used in the tool, such as locations of wind turbines, installations, radars, and notification areas.

Stakeholder groups are committed to making this effort a success and plan to meet annually to discuss needed modifications and further development of the web tool to ensure its effectiveness. NRI will continue to maintain and update TENT in perpetuity. To access the tool, go to https://tent.nri.tamu.edu/ where you can also find a user-guide to explain the utilization of TENT and how to export data and reports to use offline. Future studies that examine other areas of land use compatibility are already in discussion, and NRI hopes to expand upon the TENT tool.