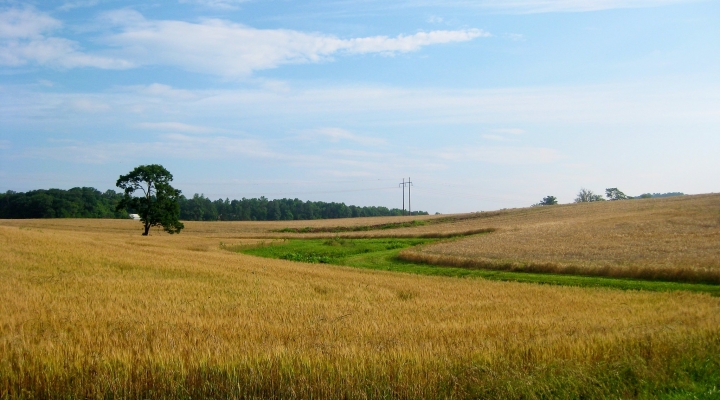 Virginia’s 5th Secretary of Agriculture and Forestry Matthew J. Lohr and the Commonwealth’s 18th Commissioner of Agriculture and Consumer Services Joseph W. Guthrie began their new roles today in service to the residents, farmers, foresters, and agribusinesses of the Commonwealth. They were appointed to their positions in early January by Governor Glenn Youngkin. In the appointment announcement, Governor Youngkin noted that their experience will give Virginia a competitive advantage in furthering the state’s agricultural industry. (photo by Jiuguang Wang, creative commons/flickr.com)

RICHMOND, Va. — Virginia’s 5th Secretary of Agriculture and Forestry Matthew J. Lohr and the Commonwealth’s 18th Commissioner of Agriculture and Consumer Services Joseph W. Guthrie began their new roles today in service to the residents, farmers, foresters, and agribusinesses of the Commonwealth. They were appointed to their positions in early January by Governor Glenn Youngkin. In the appointment announcement, Governor Youngkin noted that their experience will give Virginia a competitive advantage in furthering the state’s agricultural industry.

“I’m honored to serve on Governor Youngkin’s cabinet as Secretary of Agriculture and Forestry, representing two of the Commonwealth’s top three largest private industries. I have been passionate about agriculture my entire life and enjoy advocating for it, whether it’s through my work on the family farm, my seat in the House of Delegates, or as a state and federal official,” said Secretary Lohr. “I am excited to join Governor Youngkin in implementing his vision to grow these industries, create new jobs, expand foreign and domestic export markets, encourage sustainable land management, and improve access to broadband, especially in rural areas of the Commonwealth.”

“Thank you Governor Youngkin for this opportunity to serve Virginia’s farmers, agribusinesses, and the citizens of the Commonwealth as Commissioner of VDACS. Virginia farmers and agribusinesses are resilient and critical contributors to Virginia’s economy. I am thrilled to work with Secretary Lohr and utilize our knowledge and experiences to help improve outcomes for Virginia’s agricultural producers and for the betterment of all Virginians,” said Commissioner Guthrie.

Secretary Lohr was raised on a Virginia century family farm in the Shenandoah Valley. As a fifth-generation farmer, he continues to work for the betterment of the agricultural industry and rural America. He developed his passion for public service and agricultural policy while serving as both a state and national Future Farmers of America officer before graduating from Virginia Tech with a B.S. degree in Agricultural Education.

For the past two years, Secretary Lohr has served as the Chief of the USDA-Natural Resources Conservation Service, an agency with more than 10,000 employees across 3,000 field offices and an operating budget of over $4.5 billion. He previously served in the Virginia House of Delegates, from 2006-2010, before being appointed as Commissioner of VDACS. He has also served as Director of the Farm Credit Knowledge Center, taught middle school agri-science, operated his own leadership development company, and currently serves as President of Valley Pike Farm, Inc., his family’s farming operation.

Commissioner Guthrie is a sixth-generation Virginia farmer. He owns and operates a beef cattle and hay farm in Pulaski County on farmland that has been in his family since 1795. Since 2007, he served as a Senior Instructor at Virginia Tech and taught courses in business management, finance, communications, and leadership in the Agricultural Technology Program.

Prior to his appointment, he served the residents of Pulaski County on the Board of Supervisors since 2015 and was elected Board Chair in 2020 and 2021. He was also elected to a four-year term on the Pulaski County School Board in 2011. Commissioner Guthrie has served as the president of Virginia Tech’s College of Agriculture and Life Sciences Faculty Association, president of Pulaski County Farm Bureau, and president of the Virginia Cattlemen’s Association. He was appointed by USDA Secretary Tom Vilsack to the National Cattlemen’s Beef Promotion and Research Board and was appointed by former Governor Bob McDonnell to the Virginia Cattle Industry Board.

Commissioner Guthrie earned a B.S. degree in Agricultural Economics from Virginia Tech. He was named Virginia Tech’s Man of the Year as the outstanding graduating senior in 1989. He earned a master’s degree in 1991 in Agricultural Economics and International Trade from Massey University in New Zealand, where he studied as a Fulbright Scholar. In 2007, he was awarded the Eisenhower Fellowship in Agriculture to research international trade of beef from Australia and New Zealand.