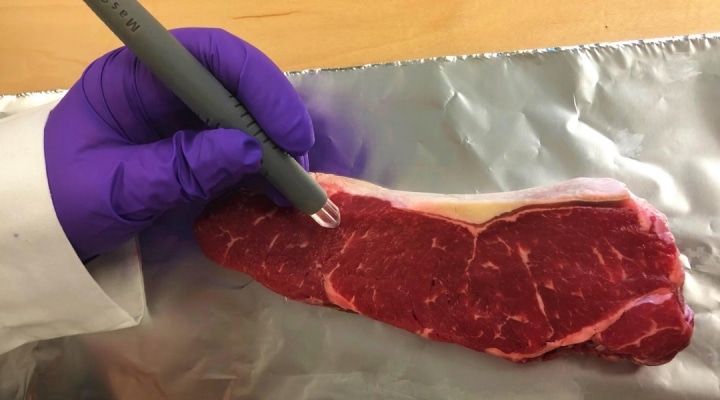 The MasSpec Pen can authenticate the type and purity of meat samples in as little as 15 seconds. (Adapted from Journal of Agricultural and Food Chemistry 2021, DOI: 10.1021/acs.jafc.0c07830)

WASHINGTON — Meat and fish fraud are global problems, costing consumers billions of dollars every year. On top of that, mislabeling products can cause problems for people with allergies, religious or cultural restrictions. Current methods to detect this fraud, while accurate, are slower than inspectors would like. Now, researchers reporting in ACS’ Journal of Agricultural and Food Chemistry have optimized their handheld MasSpec Pen to identify common types of meat and fish within 15 seconds.

News stories of food fraud, such as beef being replaced with horse meat, and cheaper fish being branded as premium fillets, have led people to question if what is on the label is actually in the package. To combat food adulteration, the U.S. Department of Agriculture conducts regular, random inspections of these products. Although current molecular techniques, such as the polymerase chain reaction (PCR), are highly accurate, these analyses can take hours to days, and are often performed at off-site labs. Previous studies have devised more direct and on-site food analysis methods with mass spectrometry, using the amounts of molecular components to verify meat sources, but they also destroyed samples during the process or required sample preparation steps. More recently, Livia Eberlin and colleagues developed the MasSpec Pen — a handheld device that gently extracts compounds from a material’s surface within seconds and then analyzes them on a mass spectrometer. So, the team wanted to see whether this device could rapidly and effectively detect meat and fish fraud in pure filets and ground products.

The researchers used the MasSpec Pen to examine the molecular composition of grain-fed and grass-fed beef, chicken, pork, lamb, venison and five common fish species collected from grocery stores. Once the device’s tip was pressed against a sample, a 20-μL droplet of solvent was released, extracting sufficient amounts of molecules within three seconds for accurate analysis by mass spectrometry. The whole process took 15 seconds, required no preprocessing, and the liquid extraction did not harm the samples’ surfaces. Then the team developed authentication models using the unique patterns of the molecules identified, including carnosine, anserine, succinic acid, xanthine and taurine, to distinguish pure meat types from each other, beef based on feeding habit and among the five fish species. Finally, the researchers applied their models to the analysis of test sets of meats and fish. For these samples, all models had a 100% accuracy identifying the protein source, which is as good as the current method of PCR and approximately 720 times faster. The researchers say they plan to expand the method to other meat products and integrate the MasSpec Pen into a portable mass spectrometer for on-site meat authentication.