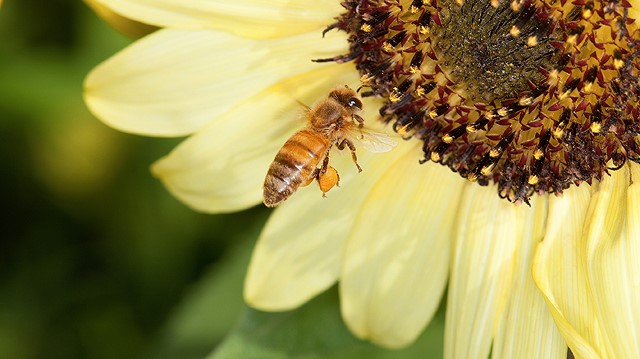 TUCSON, Ariz. — A new tool from the Agricultural Research Service (ARS) can predict the odds that honey bee colonies overwintered in cold storage will be large enough to rent for almond pollination in February. Identifying which colonies will not be worth spending dollars to overwinter can improve beekeepers’ bottom line.

Beekeepers have been losing an average of 30 percent of overwintered colonies for nearly 15 years. It is expensive to overwinter colonies in areas where winter temperatures stay above freezing. So a less expensive practice of overwintering bee colonies in cold storage is becoming popular.

This new tool calculates the probability of a managed honey bee colony surviving the winter based on two measurements: the size of colony and the percent varroa mite infestation in September, according to ARS entomologist Gloria DeGrandi-Hoffman, who headed the team. DeGrandi-Hoffman is research leader of the ARS Carl Hayden Bee Research Center in Tucson, Arizona.

By consulting the probability table for the likelihood of a colony having a minimum of six frames of bees—the number required for a colony to be able to fulfill a pollination contract for almond growers come February–beekeepers can decide in September if it is economically worthwhile to overwinter the colony in cold storage.

“The size of a colony in late summer or early fall can be deceiving with respect to its chances of making it through the winter. Even large colonies with more than 12 frames of bees (about 30,000 bees) have less than a 0.5 probability (50 percent chance) of being suitable for almond pollination if they have 5 or more mites per 100 bees in September,” DeGrandi-Hoffman said.

Even with this cost-cutting help, the research team found that revenue from pollination contracts by itself is not likely to provide a sustainable income to a beekeeper anymore. They followed 190 honey bee colonies and recorded all costs.

Considerable resources were expended to feed colonies and on varroa mite and pathogen control. Costs were about $200 per colony.

Almond pollination contracts paid an average of $190 per colony in 2019.

One way for beekeepers to remain economically viable as a business, is to produce a honey crop from their bees. This is most often facilitated by moving colonies to the Northern Great Plains where bees can forage for nectar and pollen from a wide variety flowering plants.

“The situation has changed a lot. It is more expensive to manage honey bees with costs to feed colonies when flowers are not available and to control varroa mites. And it is more difficult to find places for honey bee colonies that provide the diverse nutrition they need,” said DeGrandi-Hoffman. “Pollination revenue alone is just not adequate for beekeepers to stay in business. But we need beekeepers because managed bees are a lynchpin in agricultural production today.”

Successfully using cold storage will help beekeepers’ bottom line, but we are really just learning what the best management practices should be with cold storage,” she added.

This work was published in the Journal of Economic Entomology.