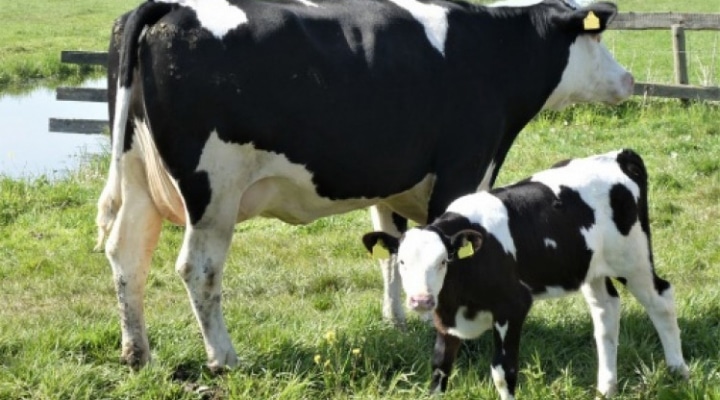 It has been estimated that the cost to raise a heifer from birth until freshening at 24 months of age in the Northeast U.S. ranges from $2,300 to $2,500. (Photo courtesy UNH Extension)

LANCASTER, N.H. — Heifers are either the second or third greatest cost on a dairy farm, behind feed costs and labor. It has been estimated that the cost to raise a heifer from birth until freshening at 24 months of age in the Northeast U.S. ranges from $2,300 to $2,500. At times such as these, understanding the costs involved with producing heifers is imperative. Included in these costs are feed, labor, veterinary, and fixed costs. It is also fair to say that many dairy farms have too many heifers resulting in an extra cost to the producer.

The number of heifers is a critical cost and affects the profitability of the farm. To evaluate the heifer need, we have to know the mortality rate, the cull rate and the age in which a heifer calves. The mortality rate and cull rate are important because they directly affect how many cows we need to replace in order to maintain an accurate sized herd. The age in which a heifer calves is also critical because it also influences the number of heifers needed but also directly influences the overall cost of bringing a heifer from birth to calving. A longer time frame inflates cost, while a shorter amount of time decreases cost.

Let’s take a look at how to calculate the number of heifers needed on the typical US dairy farm.

All of the values listed above fit into the following equation:

The numeral 2 is because it takes about 2 years to get to calving. D is divided by 24 to correct for over or under a 24 month age of first calving.

In this example the number of heifers needed is equal to:

Let’s say we increase cow longevity, which reduces the cull rate to 25%, we reduce calf mortality to 5%, and we now target to get the heifers into the milking string by 22 months.

How many heifers do we need now?

These calculations do not include the lost milk in the first example, the produced milk in the second example, and it does not consider the value of selling the heifer.

So, do you have too many heifers on your farm?

Click here to try the Heifer Calculator for yourself.