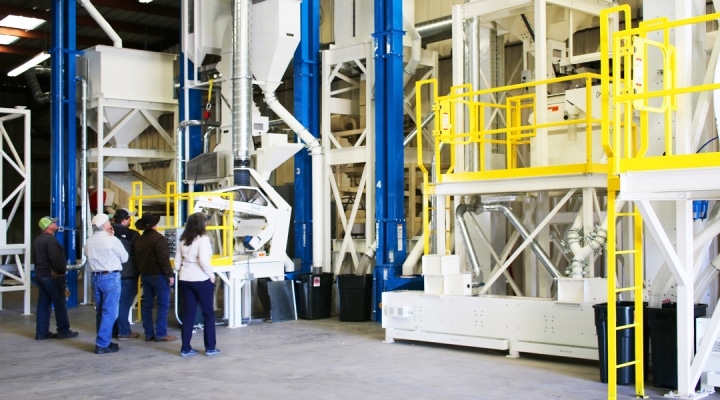 VERNON, Texas — The peanut industry is getting excited to learn what a new $1 million-plus peanut sheller at Texas A&M AgriLife Foundation Seed in Vernon will mean to improvements in seed production and marketability.

Due to design modifications, the new peanut sheller can reduce split-seed losses to less than 10%. It also offers a rarer ability to process identity-preserved peanuts, allowing food companies to procure peanuts with higher-quality traits.

“Texas A&M AgriLife’s investment in the sheller is a commitment to Texas peanut producers, the peanut industry, food companies and consumers,” Vierling said.

“The Texas Peanut Producers Board has invested a lot of money into breeding peanuts suitable for Texas’ growing conditions, but we’ve had a difficult time with our releases because of contamination,” Nutt said. “Having a shelling facility dedicated to preserving quality and seed integrity will solve the contamination problem we’ve had in the past. This will create a better environment for our peanut farmers to grow more and better varieties and for our shellers as they sell seed to be planted that isn’t contaminated with multiple varieties and types of seed.”

Approximately 2.5 billion pounds of peanuts are produced each season for edible markets, including peanut candy, peanut butter and peanut snacks. Other marketing outlets for peanuts are crude oil or cake and meal.

The primary types of peanuts are Virginia, Valencia, Runner, and Spanish. Texas is the only state that grows all four peanut types and organic peanuts. The largest peanut production in Texas can be found in Atascosa, Gaines and Yoakum counties. To date, the Texas A&M AgriLife peanut breeding program has released more than 20 improved varieties suited for Texas growers and the Southwest.