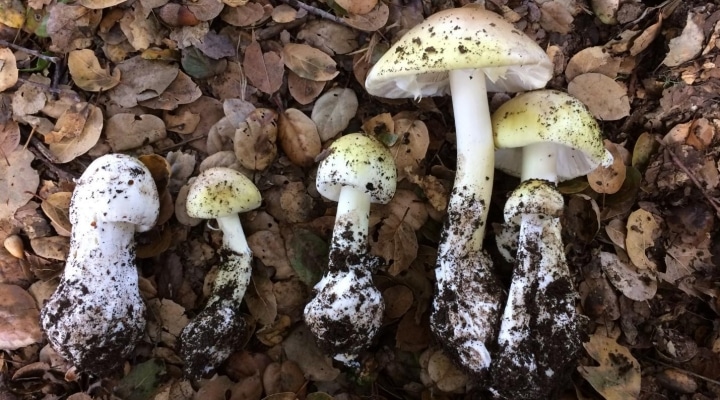 Edible and toxic mushrooms gathered from the wild can be hard to tell apart. (Candace Bever, ARS-USDA)

ALBANY, Calif. — A simple, portable test that can detect the deadliest of the mushroom poisons in minutes has been developed by Agricultural Research Service (ARS) scientists and their colleagues.

Eating toxic mushrooms causes more than 100 deaths a year, globally, and leaves thousands of people in need of urgent medical assistance. Amanitin is the class of mushroom toxins that cause the most serious issues.

The new test can identify the presence of as little as 10 parts per billion (equivalent to 10 cents out of $10 million) of amanitin in about 10 minutes from a rice grain size sample of a mushroom or in the urine of someone who has eaten a poisonous amanitin-containing mushroom. The test also works with dog urine, as dogs are known to indiscriminately eat mushrooms.

“We developed the test primarily for mushrooms as food products. Serendipitously, it was sensitive enough to also detect the toxin in urine,” said ARS microbiologist Candace Bever, who worked on the development. Bever is with the Foodborne Toxin Detection and Prevention Research Unit in Albany, California.

“Our hope is that doctors and veterinarians will be able to quickly and confidently identify amatoxin poisoning rather than having to clinically eliminate other suspected gastrointestinal diseases first,” she added. “We also hope that will give patients a better chance at recovery, even though there are no clearly effective, specific treatments right now.”

The test also could be a practical and definitive way for mushroom foragers to identify and avoid eating mushrooms with amanitin toxin if a commercial partner can be found to produce and market a test kit. This test is the most sensitive and reliable field method available to chemically identify amanitin-containing mushrooms. Although mushroom experts can identify deadly mushrooms just by looking at their appearance, experts cannot see the toxin chemicals that lurk inside.

Still this test only identifies the presence or absence of this specific class of toxin; it does not detect other compounds such as hallucinogens or toxins that cause other gastrointestinal or neurological symptoms. So, it cannot determine if a mushroom is edible.

Mushroom hunting has gained in popularity in the last several decades. A single mushroom identification group on Facebook, among many, has more than 166,000 members. Foraging for mushrooms is popular throughout most of Europe, Australia, Japan, Korea, parts of the Middle East, and the Indian subcontinent, as well as in Canada and the United States. Distinguishing toxic from nontoxic mushroom species is based on first correctly identifying the mushroom and then referencing a mushroom field guide to determine if it is known to contain toxins or not. But mushrooms of the same species can vary in appearance, especially at different life stages and habitats, making them very difficult to identify.

Many poisonous mushrooms closely resemble edible wild mushrooms. For instance, the Springtime Amanita (Amanita velosa) is a highly desirable edible wild mushroom in the Pacific coastal United States. But to the untrained eye, it can appear similar to the Death cap mushroom A. phalloides. The Death Cap accounts for more than 90 percent of fungus-related poisoning deaths in Europe.

“This test can provide more information about a wild mushroom beyond physical appearance and characteristics, and detect something we cannot even see–the presence of amanitins,” said Bever. If an affordable product like this was available, foraging could become even more popular and possibly safer.

The new test is an immuno-assay and depends on a very specifically reactive monoclonal antibody–a lab-produced protein that detects and binds only with a specific target. Scientists from the University of California-Davis, Pet Emergency and Specialty Center of Marin and Centers for Disease Control and Prevention also contributed to this project.

Training offered on ‘Signs of the Seasons’ in Maine
March 9, 2020