Home / National / New test can determine nitrogen levels in soil
A new user experience is coming! We'll be asking you to login to your Morning Ag Clips account March 1st to access these new features.
We can't wait to share them with you! Read more here. 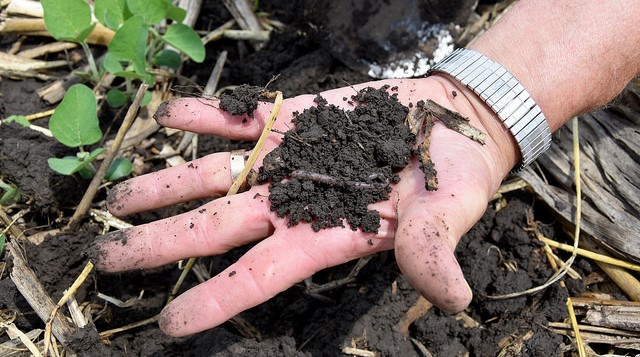 Soil is not an inert, dead plot of dirt; it contains many living organisms that enhance the soil’s ability to make nutrients available to plants.(Jason Johnson, Flickr/Creative Commons)

WASHINGTON — Nitrogen is the main nutrient added to cereal crops like corn, which makes them grow faster and stronger. But too much of a good thing could sometimes have negative outcomes. Too much nitrogen can run off with rainwater or leach through to soil and contaminate groundwater. Now, a simple, rapid and reliable test can determine the nitrogen amount in soil.

For corn growers, the current assumption is that corn grain requires 1.2 pounds of nitrogen applied for every bushel produced. This works for some soils, but not exactly for others, as the assumption doesn’t factor in nitrogen from soil organic matter. Knowing the soil’s potential to mineralize nitrogen from organic matter, making it available to plants, would help improve nitrogen fertilizer recommendations, according to U.S. Department of Agriculture (USDA) ecologist Alan Franzluebbers, lead investigator of this research.

A series of experiments published in Soil Science Society of America Journal studied the effectiveness of this quick and inexpensive approach that can tell a farmer prior to the growing season how much nitrogen will be available by testing a soil sample. In the first experiment, Franzluebbers, with Agricultural Research Service’s (ARS) Plant Science Research Unit in Raleigh, North Carolina, and his colleagues illustrated how soil nitrogen mineralization can be predicted with a three-day analysis of soil-test biological activity (STBA).

Soil is not an inert, dead plot of dirt; it contains many living organisms that enhance the soil’s ability to make nutrients available to plants. Insects, bacteria and fungi play a part in making soil valuable for crop production. The STBA measures how much “life” is contained in soil and how much usable nitrogen is in soil.

In the second experiment, Molly Pershing, a graduate student under Dr. Franzluebbers’ guidance, conducted greenhouse trials to determine if higher levels of STBA actually equated to plant uptake of nitrogen from soil. The researchers found that indeed greater STBA was associated with greater plant nitrogen uptake. Greenhouse-grown plants were not supplied any nutrients other than what was present in soil. More than three-fourths of the plant nitrogen uptake was from organic nitrogen that had to be mineralized, which was well predicted by the STBA level.

In the third experiment, Franzluebbers asked farmers to participate in the research. Forty-seven fields were sampled in the spring for STBA. On those fields, different rates of nitrogen fertilizer were applied to test which was most effective in optimizing corn yield. The higher the STBA level—indicating a large amount of “life” in the soil—the lower the need for additional nitrogen. The lower the STBA level, the greater the need for additional nitrogen.

Adding too little nitrogen can lead to a smaller harvest—costing farmers the opportunity to make more money. Adding too much nitrogen costs farmers money in unnecessary input to soil. Applying nitrogen at the correct levels can optimize yield and profit while keeping excess nutrients out of rivers, lakes and groundwater. Using STBA, corn growers now have a preseason test that can more accurately determine the proper amount of nitrogen to apply for economically optimum yield.

New class of herbicide may be on the horizon

$2B supports producers affected by disasters