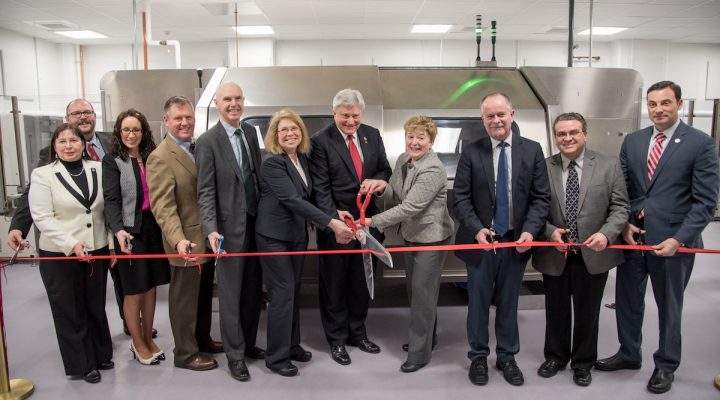 ITHACA, N.Y. — Cornell University food scientists are putting the squeeze on the microorganisms that spoil food and make people sick.

High-pressure food processing takes ready-to-eat foods, already in their final packages, surrounds the packages with water, then subjects them to isostatic pressure up to 87,000 pounds per square inch. For comparison, that’s more than six times the pressure at the bottom of the Mariana Trench, the deepest ocean trench on earth.

Better understanding of high-pressure food processing is especially important for manufacturers of fresh, packaged, ready-to-eat foods: that segment of the food market is booming as consumers look for healthier choices but still demand convenience. According to the USDA Economic Research Service, supermarket sales of prepared, ready-to-eat foods grew at twice the rate of other grocery products in the mid-2000s.

Food science professor Randy Worobo is overseeing the new validation center that houses the high-pressure processing unit. The validation center is part of the Institute for Food Safety at Cornell University, established in 2015 with $2 million in state funding to harness Cornell’s strengths in food safety research and training to combat foodborne illness.

“The food industry is adapting high-pressure processing very rapidly because it retains the fresh-like character of the food products while guaranteeing safety by inactivating foodborne pathogens,” Worobo said. “At Cornell University, we have a long-standing history of working very closely with the food industry to help companies innovate and create new products, while ensuring the safety of the food. This is just another example of our collaboration fueling economic opportunities for companies while protecting consumers.”

“With this machine we take giant steps in our work to revolutionize the food processing industry and place the Cornell University College of Agriculture and Life Sciences, and especially the Experiment Station in Geneva at its epicenter,” said recently retired New York State Senator Mike Nozzolio.

“This state-of-the-art validation facility would not have been possible without the leadership of Senator Nozzolio and the generosity of Wegmans Food Markets, Lidestri Foods, Suja and Hiperbaric,” said Kathryn J. Boor, the Ronald P. Lynch Dean of the College of Agriculture and Life Sciences. “The Senator has already been instrumental in securing significant state funding to enhance many areas of the Station, and now, with this acquisition, he is securing the future of food safety for New Yorkers and those throughout the United States.”

The commercial-grade processor at Cornell is the first in the U.S. installed within a Biohazard Level 2 facility — which means researchers will be able to introduce pathogens to foods and test how well the pressure system kills them.

“Because high-pressure processing is such a new technology, the federal regulatory agencies are not that familiar with it, and what they expect is for companies to have validation studies that actually demonstrate that under this pressure, for this time, with this food, that you get a consistent pathogen reduction that meets regulatory guidelines,” Worobo said. “Cornell is setting the standards that companies will use to bring fresh, high quality foods to market in a safe way.”

State Agriculture Commissioner Richard A. Ball said, “New York State is and has been a national leader in emerging technologies and high pressure processing is the future.  Not only does it extend the shelf life of foods and preserve its nutritious integrity, it provides an additional layer of food safety protections for consumers.  More and more, shoppers want to buy food that they know is fresh and healthy and this process helps ensure those qualities. At the same time, it gives New York’s growers and processors a competitive edge in the marketplace.  Beyond that, it will provide tremendous economic opportunities as the new Institute for Food Safety becomes a key part of the validation of this groundbreaking method. Congratulations to CALS on this incredible honor.”

Currently, the most common process used by food manufacturers to kill harmful pathogens like Listeria and E. coli involves heat treatments. But that’s problematic for fresh, ready-to-eat foods, like salads, cheeses, guacamole, and hummus, because heat changes the food’s flavor, texture and some nutritional components.

Another method to inhibit spoilage microorganisms is to apply chemical preservatives, but consumers are growing increasingly wary of that method. Ultraviolet radiation can be used to kill pathogens, but is limited to fluids where the UV light can penetrate.

In addition to testing samples for individual companies, Worobo said Cornell researchers will be “working nonstop” to develop “microbial safe harbors,” which are essentially best processing recommendations for food manufacturers.