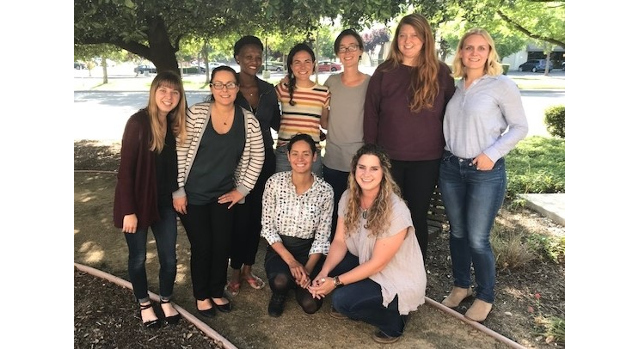 DAVIS, Calif. — Scientists are developing climate-smart farming practices, California is offering financial incentives to implement them, and now a group of 10 UC Cooperative Extension climate-smart educators are taking the program to the next level.

The climate smart programs offered by CDFA and promoted by UC ANR educators are:

The educators provide hands-on assistance to farmers and ranchers through the complex application process, conduct field days with climate-smart farmers, establish demonstration plots to share the practices, and work with farmers who are voluntarily implementing climate-smart farming.

Most of the educators were hired in early 2019, just weeks before the application deadline. They are now gearing up for a second cycle of applications. The state funded 194 projects in 2018, and 217 in 2019.

Each of the educators has a passion for agriculture and the environment, shaped by their upbringing, experiences and education.

“I am interested in carrying out research that focuses on the adoption and economics of climate change best management practices. The practices should help farmers continue their business,” said Esther Mosase, climate-smart educator in San Diego County. “I’m interested in seeing policymakers making policies that have a farmer as a focal point. They have been here long, they have been tilling the land, they can also contribute in coming up with better solutions that reduce climate change.”

The state is providing incentives for farmers to improve soil health in order to moderate the conditions that are driving global climate change. Improving soil health increases its ability to store carbon and reduce greenhouse gas emissions. Side benefits include improved water infiltration, nutrient cycling and dust control.

Farmers can apply for three-year grants to implement new practices on their farm, such as reducing tillage, growing cover crops and applying compost. Conventional farm practices turn the earth, releasing the stored carbon back into the atmosphere.

Baskerville started college as a theater major in Sacramento, then realized that wouldn’t result in a viable career. After suffering from an autoimmune disease tied to microbiome health, she began to understand the important role of the food and agricultural industries in public health. Baskerville earned a bachelor’s degree from UC Berkeley that combines sustainable agriculture with the sociological and ecological impacts of agriculture, natural resources conservation and public health.

Last summer, Baskerville served as a program coordinator in an adaptive agriculture learning environment, where she designed two practicum programs for adults. She is considering a career in the food industry.

Bergren grew up in a small fishing town on an island in Alaska. She earned a bachelor’s degree in earth systems at Stanford University in 2013, and then spent two and a half years in Paraguay as a Peace Corps volunteer. Bergren worked with a women’s garden cooperative and with subsistence farmers. She spent the last three years as a community organizer.

“I was so excited to find this job, which combines my interests in working directly with all kinds of people on the intersection of agriculture and climate change,” Bergren said. “I’ve especially enjoyed using my Spanish-language skills to work with traditionally underserved farmers in this area.”

Brady completed a bachelor’s degree in animal science at Chico State University in 2018. She was familiar with UC Cooperative Extension through school and had visited UCCE research sites.

Brady grew up in a farming and ranching family in rural Linden, southeast of Stockton.

“My earliest memory is of my grandfather’s farm, where he had an emu, donkey and llama,” she said. “I was in 4-H and FFA as long as I can remember.”

In addition to working directly with farmers on grant applications, Brady has been helping advisors in Glenn County on research projects and building relationships in the community through workshops and seminars.

“I am also very excited for an upcoming event at an elementary school farm day to present about Climate Smart Agriculture and presenting at some bigger events later this year with a few others in the cohort,” Brady said.

A native of Nepal, Budhathoki traveled to the United States in 2015 to attend college at Fresno State, where she graduated with a bachelor’s degree in plant science. During her studies, she completed a weed and salinity management project with professor Anil Shrestha. Budhathoki served as an intern in plant pathology with Bayer Crop Science.

She developed in interest in agriculture because of the industry’s importance to society and the world.

“Some people don’t get enough to eat even once a day. I wanted to join the effort to end world hunger and food insecurity,” Budhathoki said.

Budhathoke said she also is concerned about climate change and welcomes the opportunity to help farmers maintain a sustainable agriculture industry even in the face of climate change.

In the future, she plans to pursue graduate studies in climate change or water management.

Lovell grew up in Sacramento and developed an interest in agriculture when she was overcoming a serious illness. She graduated from UC Davis in 2016 with a bachelor’s degree in sustainable agriculture and food systems.

“Originally, I didn’t want to make money in agriculture,” she said. “I wanted to live off the land. I believe farming is a political act and I wanted to help return power to the people through farming and land ownership.”

Lovell said she is interested in pursuing a graduate degree in an area that combines community resiliency through localized food systems and economics and, eventually, becoming a crop adviser.

Mosase has a master’s degree in agricultural engineering from Botswana College of Agriculture and a doctorate from South Dakota State University in civil engineering. Her master’s research focused on water resources, watershed modeling and management.

Raised in a farming family in Botswana, Mosase experienced the impact of climate change firsthand.

“I remember we had drought years, normal years and extremely wet years,” she said. “Twenty years ago, it was not uncommon for open water to freeze. But now we get mild winters and very hot summers. Rain-fed agriculture is now a risky enterprise compared to two decades ago.”

“For instance, one farmer wanted to improve the water quality at the edge of his avocado and citrus farm before it enters the stream. He also wanted to be helped with pools of standing water in the farm that usually affect the health of avocado trees,” Mosase said. “We advised him on what to do regarding the standing water, but for the edge of the field treatment, we decided to install bioreactors.”

Mosase will help collect field data on the bioreactors’ effectiveness and plans to publish the results.

Perez earned a bachelor’s degree in agricultural business at California Polytechnic State University, San Luis Obispo in 2018. She accepted an internship with a large animal veterinarian, and found her passion, she said. In addition to working as a climate smart community educator, Perez is taking prerequisite courses for veterinary school. She hopes her career will lead to conducting research to benefit the meat industry.

“I’ve always been interested in ways to better agriculture and how our systems could improve, but it wasn’t until I received this job that my interest for climate-smart agriculture really peaked,” Perez said. “Agriculture is such an important industry, it is vital that we find ways to educate one another on how to better what we have been doing for so many years.”

Rowe has a bachelor’s degree in biology from Colorado College in Colorado Springs and a master’s degree from the Bren School of Environmental Science and Management at UC Santa Barbara. Her background and interests focus on the interface of land management and climate change.

“Everyone and everything is interwoven with our food system and yet so much of how we produce food accelerates climate change,” Rowe said. “I enjoy being at the interface of science and education, where the rubber meets the road. I wanted to find a role where I could work with people on the ground and implement solutions to climate change while contributing to resilient farming economies.”

She said it is encouraging to see that farmers and ranchers are interested in climate-smart agriculture and welcome the technical assistance.

Salgado is a native of Calexico, a city located across the border from its sister city, Mexicali, Mexico. Her farming experience centers on urban agriculture.

“Growing food on non-agricultural land has allowed me to learn the technical/scientific processes that go into growing food,” she said.

Salgado plans to continue her education in a doctoral program in ethnic studies at UC San Diego, where she can focus on several overlapping areas of interest, including race studies, food justice, sustainable agriculture, climate change, environmental decision-making processes, and participatory action research methodology and practices.

Shroder attended college at the University of Maryland in College Park, earning bachelor’s degrees in environmental science and policy and in Spanish language, literature and cultures. She has worked in an agricultural research lab, in the gardens at the University of Maryland and in a nearby organic farm. After graduating in 2016, Shroder volunteered with the Peace Corps in Senegal, West Africa, where she trained farmers on gardening and agroforestry techniques and extended improved varieties of staple crops like beans, corn, millet and sorghum.

“While serving in Senegal, I saw firsthand the effects of desertification and erratic rainfall on the ability of the community to feed itself,” she said

Shroder intends to earn a master’s degree and continue to research and promote sustainable agriculture techniques.

Apply now for a 2020 Angus Internship

Why do farmers care about conservation?
March 23, 2020