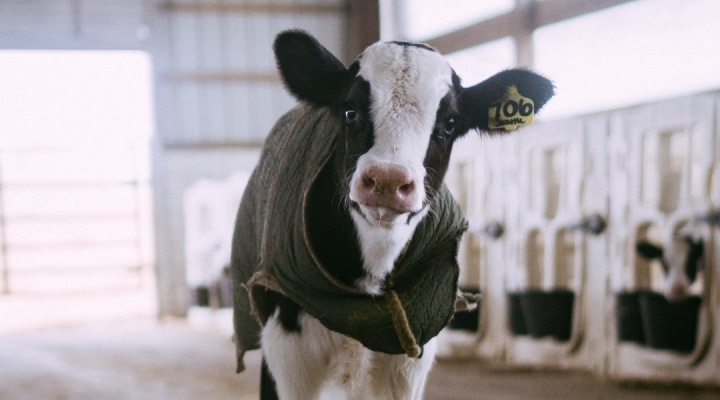 “Past behavioral studies have indicated that lack of social interaction can negatively affect calves’ feed intake, social skills, coping abilities, and cognitive performance,” stated lead investigator Marina von Keyserlingk, PhD. “However, previous studies on social motivation among young cattle have not addressed the first six to eight weeks of life, when individual housing is the most common.” (Photo by Amber Kipp on Unsplash)

PHILADELPHIA — Most dairy calves are housed individually in the first weeks and sometimes months of their lives, a practice that has come under scrutiny for its effects on animal behavior, welfare, and health. Despite growing scientific and public support for social housing, approximately 75% and 60% of preweaning dairy calves in the United States and Europe, respectively, are still housed individually. A new study by researchers at the University of British Columbia (Vancouver, Canada), scheduled for publication in the January 2022 issue of JDS Communications, examines young dairy calves’ motivation to seek companionship from other calves.

Individual housing of dairy calves is intended in part to manage milk intake and prevent cross-sucking of pen mates. Prior research has suggested that individual housing also benefits calf health, although this claim has been disputed.

“Past behavioral studies have indicated that lack of social interaction can negatively affect calves’ feed intake, social skills, coping abilities, and cognitive performance,” stated lead investigator Marina von Keyserlingk, PhD. “However, previous studies on social motivation among young cattle have not addressed the first six to eight weeks of life, when individual housing is the most common.” To fill that gap, the research team examined behaviors of young dairy bulls, averaging approximately five days of age at the start of the study.

Bull calves in the study were housed individually in a central home pen with access to one pen on either side, each connected by a one-way clear plastic push gate. All pens were identical in size and resources, with the same amounts of feed, hay, and water provided; however, one side pen housed another calf of similar age, and the other was empty. The calves could see through the gates, and they could also have visual and limited physical contact with one another through the gaps above and below the gate, even when closed. The calf in the center pen could choose to enter either the empty pen or the pen containing the companion, or to remain in its own pen.

“Each time the test calf pushed open the gate to access a side pen, he would remain in it until the next milk feeding (approximately 0800 and 1600 h), at which time he was returned to the central home pen,” von Keyserlingk explained. “After each successful pushing event, additional weight was added to the gate – initially a small amount, then incrementally higher.” With this design, the task of pushing through the gate was nearly effortless at the beginning of the trial, to facilitate learning, but more substantial differences could be detected by the end of the 15-day trial. Additionally, the pen that would hold the companion calf was randomly assigned daily, so that calves would not simply learn which side housed their companion.

The researchers found that the dairy calves pushed more weight to access pens with a social partner compared with empty pens. All calves but one pushed through a gate for the first time on the first day of the study, on average within ten minutes of the experiment’s start. Of the ten calves tested, eight pushed more for the social side, one pushed more for the empty side, and one pushed the same weight for both sides. Over the 15-day trial, calves pushed on average 1.0 kg more (with an average of 2.2 more pushing events) to access the social versus the empty pen.

The results indicate that young calves are motivated for full social contact, even when they have partial contact, adding to the body of research demonstrating the importance of social contact for calves. The findings highlight the ability of calves to spontaneously display their social motivation. Further, the authors note, the testing method used in this study did not require training, but calves quickly learned to use the gates on their own, suggesting that this task could be readily used to assess spontaneous motivation in other situations.