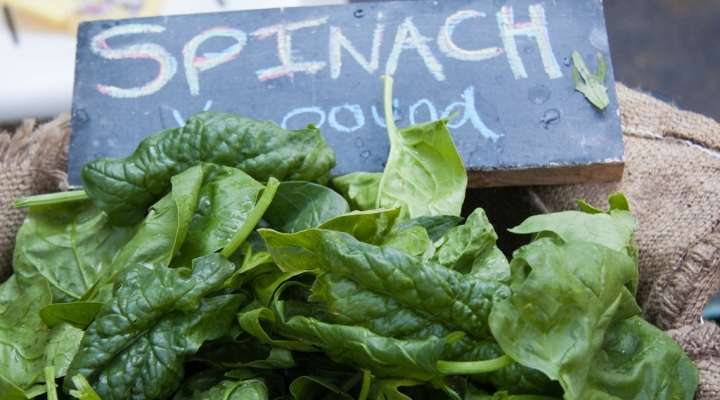 "The spinach genome sequence and transcriptome variants developed in this study provide a wealth of valuable information that can be used to breed spinach with better disease-resistance, higher yield and better quality," asserted Zhangjun Fei, the project's lead researcher from BTI. (Tim Sackton, Flickr/Creative Commons)

WASHINGTON — While you may not gulp spinach by the can-fuls, if you love spanakopita or your go-to appetizer is spinach artichoke dip, then you’ll be excited to know that new research out of Boyce Thompson Institute (BTI) will make it even easier to improve this nutritious and delicious, leafy green.

Today in Nature Communications, researchers from BTI and the Shanghai Normal University report a new draft genome of Spinacia oleracea, better known as spinach. Additionally, the authors have sequenced the transcriptomes (all the RNA) of 120 cultivated and wild spinach plants, which has allowed them to identify which genetic changes have occurred due to domestication.

“The spinach genome sequence and transcriptome variants developed in this study provide a wealth of valuable information that can be used to breed spinach with better disease-resistance, higher yield and better quality,” asserted Zhangjun Fei, the project’s lead researcher from BTI.

Spinach, which is native to central Asia, is now cultivated worldwide, with a reported annual production of 24.3 million tons in 2014. Since it was first domesticated, gardeners and breeders have improved many agronomically important traits, such as leaf quality and nutrition, and over time these improvements have re-shaped the spinach genome. In turn, breeders today can use genomic information to speed up improvements, which is especially important for combatting significant diseases, like downy mildew.

Known as the ‘late blight’ of spinach, the downy mildew disease has devastated crops throughout California, and has recently popped up in Upstate New York. Armed with a better understanding of the spinach genome, the researchers have identified several genes that may confer resistance to the downy mildew pathogen. Once identified in a resistant variety of spinach, such genes could be quickly transferred to other, possibly more nutritious varieties, boosting their immune systems to fight this disease while still maintaining marketable traits.

Of particular interest to the researchers is the discovery that the genomes of cultivated spinach varieties are not too different from their wild progenitors. When a plant is domesticated, its genome will evolve over centuries of selection. In many cases, it gets forced through a bottleneck of genetic changes necessary for cultivation, creating a very different plant from that which was first brought out of the wild. A great example is the comparison of maize (corn) to its ancestor, teosinte.

“By analyzing transcriptome variants of a large collection of cultivated and wild spinach accessions, we found that unlike other vegetable crops such as tomato and cucumber, spinach has a weak domestication bottleneck,” explained first author, Chen Jiao.

This was great news because it means there is still much room for spinach improvement, but it also made it tougher to pinpoint genomic markers that could speed up the breeding process. Nonetheless, the team identified many regions in the genome directly attributable to the domestication process, that could be possibly linked to valuable traits, such as bolting, leaf number, and stem length

When asked for her favorite spinach recipe, first author Chen Jiao replied, “I usually make spinach salad for my family twice a week. It is very nutritious and easy to make. I just throw a handful of baby spinach, some croutons and fried bacon, and boiled eggs in a bowl and then drizzle all with bottled dressing.”

So the next time you eat a luscious, green spinach salad, thank a scientist for keeping you healthy and strong!

Can backyard chickens provide answers about transmission of the West Nile virus?
October 27, 2021