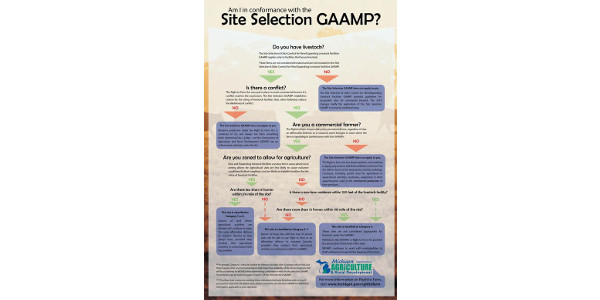 New provisions of the Site Selection GAAMP for those with 50 animal units or less. (Photo credit: Michigan Department of Agriculture and Rural Development, MSU Extension)

Scenario 1: You live in an urban residential neighborhood in a community that has embraced local foods. There is a food co-op, active farmers market, community support agriculture and more. You decide to raise animals at your home. It is your property, so you believe you have right to farm protection. However, you are confronted with opposition and local government regulation that opposes your actions.

Scenario 2: You live in the same urban residential neighborhood and you chose to live there so you are not near animals and the annoyance of their smell, noise, and to protect yourself because you are highly allergic to them. It is your property; you believe you have the right not to have such nuisances near you. But, now your new neighbor is raising small livestock animals.

Under old common law, a person has legal recourse to protect themselves from a nuisance at their property, and one of the principles is that if you are there first, and the nuisance comes to you, you may prevail. However, if the activity that is considered the nuisance is there first, and someone moves to it – one does not get the same protection.

Michigan enacted the RTFA (MCL 286.471 et seq.) in 1981 to protect farms from nuisance claims. It is codification of the principle that a farm should get protection from suits from those who move out to the farm country. It protects farms even if they change their operation, enlarge it, and more. New farms, if they follow GAAMPs, also receive this protection. In 2000, the Michigan legislature amended the RTFA to severely restrict local government from regulating farms. The act reads:

There has been a lot of litigation about preemption of local regulation, with some judges and magistrates ruling that zoning cannot even prevent farming in established neighborhoods, in cities, villages or urban-like townships. This is unsettled law, which has not been definitively resolved.

Remember the two scenarios with the two individuals: one who wants to farm anywhere, and the second who chooses a residential area specifically to avoid living near farms? While this is an over-simplification, it is a problem confronting the Michigan Commission of Agriculture and Rural Development and the basis for their 2014 update to the Generally Accepted Agricultural and Management Practices for Site Selection and Odor Control for New and Expanding Livestock Facilities (Site Selection GAAMP).

Part of the foundation of the is that there is not a single state-wide solution to balancing the two differing interests in the two scenarios. So, the intent was to empower local government to be able to accommodate such small farms through local ordinances, if desirable. It was a response to the growing interest in urban agriculture, and the Commission’s attempt to balance concerns in residential areas where all livestock may not be appropriate. A result of the change to the Site Selection GAAMP is that more-dense, urban communities can engage residents to decide if livestock, with or without certain conditions, is appropriate in certain locations. In other words, more urban communities can develop a local solution that works best, given the opinions of local residents and policy makers. One can expect different communities will make different decisions:

The change to the Site Selection GAAMP added a fourth category site for livestock facilities. Category 1 sites are locations that have been traditionally used for agricultural purposes and are in an area with a relatively low residential housing density. These are locations where very large animal operations can locate. Category 2 sites have more non-farm residences in the rural neighborhood. So additional technologies and management practices are appropriate for animal operations based on the Site Selection GAAMP. Category 3 sites are locations that are not generally acceptable for new and expanding animal operations because of environmental issues or numerous non-farm residences.

The latest Category 4 sites are locations that are not acceptable for new or expanding animal operations (livestock facilities and livestock production facilities) based on the Site Selection GAAMP. However, the raising of farm animals is possible if a local government ordinance provides for it. Category 4 sites are locations that are “primarily residential,” that is there are more than 13 non-farm residences within 1/8 mile of the site or any non-farm residence within 250 feet.

In other words, small (less than 50 animal units) livestock facilities in “primarily residential” locations are not banned from those locations, rather the decision as to if it is an appropriate location is shifted from the state, with GAAMPs, to the local government to determine. (An animal unit is the number of animals equivalent to one slaughter and feed cattle. Depending on the animal, 50 animal units are proportionate based on a number of factors. For example, 50 animal units means 125 swine, 500 sheep and lambs, 25 horses, 2,750 turkeys, 5,000 laying hens or broilers.)

Michigan Department of Agriculture and Rural Development developed an infographic that further explains the provisions of the Site Selection GAAMP for those with less than 50 animal units.

In addition to this article, Michigan State University Extension articles focusing on a specific audiences and concerns include:

Updated from an original article written by Kurt H. Schindler.