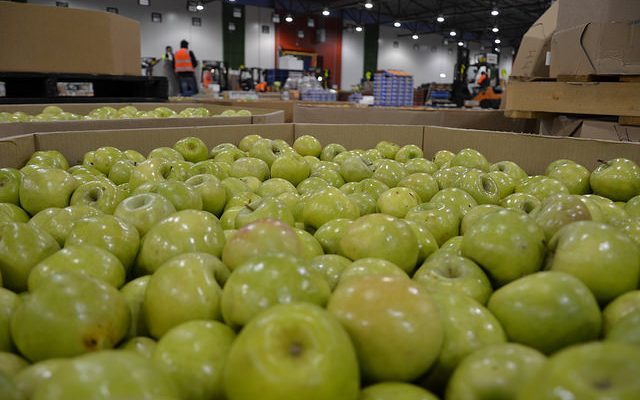 The sensor, which is made from semiconducting cylinders called carbon nanotubes, could be used to monitor fruit and vegetables as they are shipped and stored, helping to reduce food waste, says Timothy Swager, the John D. MacArthur Professor of Chemistry at MIT. (Apple and Pear Australia via Flickr)

CAMBRIDGE, Mass. — As flowers bloom and fruits ripen, they emit a colorless, sweet-smelling gas called ethylene. MIT chemists have now created a tiny sensor that can detect this gas in concentrations as low as 15 parts per billion, which they believe could be useful in preventing food spoilage.

The sensor, which is made from semiconducting cylinders called carbon nanotubes, could be used to monitor fruit and vegetables as they are shipped and stored, helping to reduce food waste, says Timothy Swager, the John D. MacArthur Professor of Chemistry at MIT.

“There is a persistent need for better food management and reduction of food waste,” says Swager. “People who transport fruit around would like to know how it’s doing during transit, and whether they need to take measures to keep ethylene down while they’re transporting it.”

In addition to its natural role as a plant hormone, ethylene is also the world’s most widely manufactured organic compound and is used to manufacture products such as plastics and clothing. A detector for ethylene could also be useful for monitoring this kind of industrial ethylene manufacturing, the researchers say.

Swager is the senior author of the study, which appears today in the journal ACS Central. MIT postdoc Darryl Fong is the lead author of the paper, and MIT graduate student Shao-Xiong (Lennon) Luo and visiting scholar Rafaela Da Silveira Andre are also authors.

Ethylene is produced by most plants, which use it as a hormone to stimulate growth, ripening, and other key stages of their life cycle. Bananas, for instance, produce increasing amounts of ethylene as they ripen and turn brown, and flowers produce it as they get ready to bloom. Produce and flowers under stress can overproduce ethylene, leading them to ripen or wilt prematurely. It is estimated that every year U.S. supermarkets lose about 12 percent of their fruits and vegetables to spoilage, according to the U.S. Department of Agriculture.

In 2012, Swager’s lab developed an ethylene sensor containing arrays of tens of thousands of carbon nanotubes. These carbon cylinders allow electrons to flow along them, but the researchers added copper atoms that slow down the electron flow. When ethylene is present, it binds to the copper atoms and slows down electrons even more. Measuring this slowdown can reveal how much ethylene is present. However, this sensor can only detect ethylene levels down to 500 parts per billion, and because the sensors contain copper, they are likely to eventually become corroded by oxygen and stop working.

“There still is not a good commercial sensor for ethylene,” Swager says. “To manage any kind of produce that’s stored long-term, like apples or potatoes, people would like to be able to measure its ethylene to determine if it’s in a stasis mode or if it’s ripening.”

Swager and Fong created a new kind of ethylene sensor that is also based on carbon nanotubes but works by an entirely different mechanism, known as Wacker oxidation. Instead of incorporating a metal such as copper that binds directly to ethylene, they used a metal catalyst called palladium that adds oxygen to ethylene during a process called oxidation.

As the palladium catalyst performs this oxidation, the catalyst temporarily gains electrons. Palladium then passes these extra electrons to carbon nanotubes, making them more conductive. By measuring the resulting change in current flow, the researchers can detect the presence of ethylene.

“You’re toggling between two different states of the metal, and once ethylene is no longer there, it goes from that transient, electron-rich state back to its original state,” Fong says.

To test the sensor’s capabilities, the researchers deposited the carbon nanotubes and other sensor components onto a glass slide. They then used it to monitor ethylene production in two types of flowers — carnations and purple lisianthus. They measured ethylene production over five days, allowing them to track the relationship between ethylene levels and the plants’ flowering.

In their studies of carnations, the researchers found that there was a rapid spike in ethylene concentration on the first day of the experiment, and the flowers bloomed shortly after that, all within a day or two.

Purple lisianthus flowers showed a more gradual increase in ethylene that started during the first day and lasted until the fourth day, when it started to decline. Correspondingly, the flowers’ blooming was spread out over several days, and some still hadn’t bloomed by the end of the experiment.

The researchers also studied whether the plant food packets that came with the flowers had any effect on ethylene production. They found that plants given the food showed slight delays in ethylene production and blooming, but the effect was not significant (only a few hours).

— Massachusetts Institute of Technology via EurekAlert!