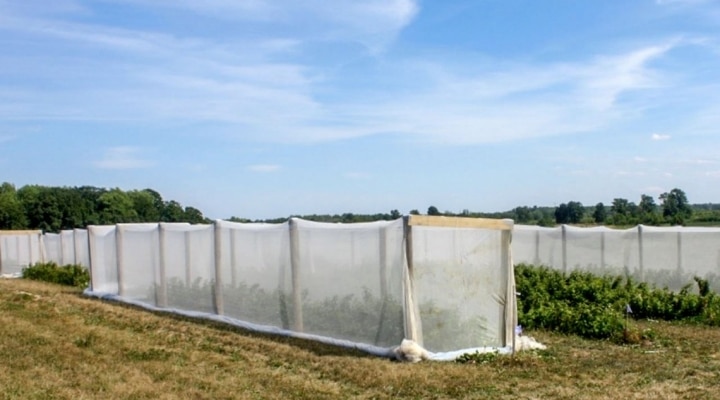 STEPHENTOWN, N.Y. — At the Berry Patch farm in Stephentown, New York, big, ripe blueberries are waiting to be picked.

The farm is experiencing one of its best seasons to date, thanks to better management of fall infestations of spotted wing drosophila (SWD), part of a research collaboration with Greg Loeb, professor of entomology at Cornell AgriTech, part of the College of Agriculture and Life Sciences (CALS).

For the past few years, Loeb has been experimenting with a thin mesh covering, called exclusion netting, around berry crops as a means to prevent SWD infestation. The efficacy of the netting, at Berry Patch and in Cornell AgriTech research fields, is documented in a paper, “Factors Affecting the Implementation of Exclusion Netting to Control Drosophila Suzukii on Primocane Raspberry,” published in the journal Crop Protection.

The Berry Patch, owned by Dale-Ila Riggs and Don Miles, has experienced the devastation SWD can cause in late ripening berries like blueberries and raspberries. In 2012, their blueberry crop was attacked, resulting in a loss of 40% of their crop. Although the farm tries to operate without the use of pesticides, Riggs and Miles had no choice but to begin the costly endeavor of spraying insecticides six nights a week for the entire growing season.

Unlike a regular fruit fly, which attacks overripe fruit, SWD attacks the berry as it’s ripening in the field. Females lay eggs in the berries; the eggs then hatch into larvae during the berry ripening phase, rendering the fruit unmarketable.

The SWD infestation rate is greater in late-season berries, such as blueberries and fall raspberries, resulting in many New York state growers removing their late-season berry plantings because of the difficulty and cost of pest control.

“We were doing our best to keep SWD at bay back then,” said Riggs, a former Cornell Cooperative Extension educator, who co-authored the paper. “But we also knew spraying all the time wasn’t sustainable and it also didn’t align with our business model.”

Riggs heard about positive preliminary results of the netting and reached out to Loeb. The netting attaches to a frame and surrounds berry crops in order to minimize SWD contact with berries.

Loeb’s research in 2016 and ’17 indicated that exclusion netting was effective at controlling SWD infestations in raspberries, particularly if implemented early in the season.

While the research supports the viability of exclusion netting in managing SWD, it also indicates that additional management techniques may need to coincide with the netting. For example, SWD outbreak infestations could still occur when workers move in and out of netted plantings.

“For this reason, if growers adopt exclusion netting, they must be prepared to manage outbreaks as necessary,” said lead author Dara Stockton, a postdoctoral associate in Loeb’s lab. “Still, the benefits of using the netting seem to outweigh the risks and research indicates that as few as one to two sprays per year may be sufficient.”

Over the six years that Riggs has been using exclusion netting for her blueberries, she said she has never had to apply pesticides and has had less than 1% incidence of SWD each year. Another major benefit is cost: Riggs said that for her .1-acre high-tunnel raspberry plot, she spent roughly $300 on exclusion netting, whereas it would cost her $600 for a season’s worth of pesticides.

“Ultimately, the quality of the berries at our farm is most rewarding,” she said. “Under these nettings, we are breaking records and giving Oregon and Washington blueberry yields a run for their money.”

Riggs, Loeb and Cornell Cooperative Extension (CCE) collaborators plan to use a demonstration plot at the Berry Patch in the year ahead to show other New York berry producers the success of exclusion netting as well as best practices.

“Looking back at this research, I’m reminded of just how important a grower’s role is in shaping our efforts at Cornell AgriTech,” Loeb said. “Our work with Dale-Ila Riggs is a perfect example – we listened to her needs and worked with her to research a system that will offer a lot of benefits to growers in years to come.”

Other co-authors included Marvin Pritts, professor of plant science in the College of Agriculture and Life Sciences, and researchers from CCE and the U.S. Department of Agriculture.

Grants from the U.S. Department of Agriculture’s National Institute of Food and Agriculture and from Cornell supported this research.

Erin Rodger is the senior manager of marketing and communications for Cornell AgriTech.