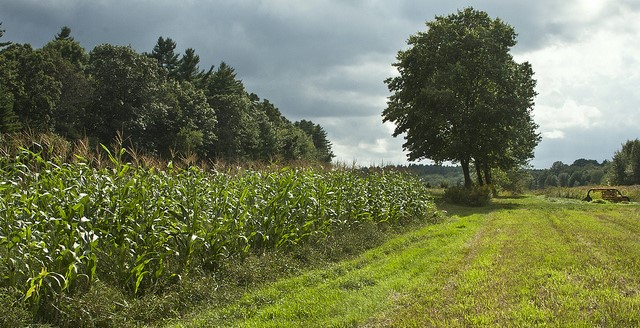 By 2022, given current trends, the GHG profile of corn-based ethanol is expected to be almost 50 percent lower than gasoline primarily due to improvements in corn yields, process fuel switching, and transportation efficiency. (liz west, Flickr/Creative Commons)

WASHINGTON — Agriculture Secretary Tom Vilsack today announced the release of a report studying the lifecycle greenhouse gas (GHG) balance of corn ethanol. The report, A Life-Cycle Analysis of the Greenhouse Gas Emissions of Corn-Based Ethanol, finds that GHG emissions associated with corn-based ethanol in the United States are about 43 percent lower than gasoline when measured on an energy equivalent basis. Unlike other studies of GHG benefits, which relied on forecasts of future ethanol production systems and expected impacts on the farm sector, this study reviewed how the industry and farm sectors performed over the past decade to assess the current GHG profile of corn-based ethanol.

“This report provides evidence that corn ethanol can be a GHG-friendly alternative to fossil fuels, while boosting farm economies” said Vilsack.

This report found greater lifecycle GHG benefits from corn ethanol than a number of earlier studies, driven by a variety of improvements in ethanol production, from the corn field to the ethanol refinery. Farmers are producing corn more efficiently and using conservation practices that reduce GHG emissions, including reduced tillage, cover crops and improved nitrogen management. Corn yields are also improving—between 2005 and 2015, U.S. corn yields increased by more than 10 percent.

Between 2005 and 2015, ethanol production in the U.S. also increased significantly—from 3.9 to 14.8 billion gallons per year. At the same time, advances in ethanol production technologies, such as the use of combined heat and power, using landfill gas for energy, and co-producing biodiesel helped reduce GHG emissions at ethanol refinery plants.

By 2022, given current trends, the GHG profile of corn-based ethanol is expected to be almost 50 percent lower than gasoline primarily due to improvements in corn yields, process fuel switching, and transportation efficiency.

The report also examines a range of factors that could enhance the GHG benefits of corn ethanol production and provides estimates of how those factors change ethanol’s lifecycle GHG emissions. For example, the report examined the benefits of improving the efficiency of ethanol refinery plants and adoption of additional conservation practices on corn-producing farms. In a scenario where these improvements and practices are universally adopted, the GHG benefits of corn ethanol are even more pronounced over gasoline, about a 76 percent reduction.

There are several reasons this report found greater lifecycle GHG benefits from corn ethanol than a number of earlier studies. Previous estimates anticipated that growing corn to produce ethanol would result in “indirect land use change”—in other words, land would be converted from grasslands and forests to commodity production as a result of increased demand for corn used in ethanol production. But based on new data and research, there is compelling evidence that while land use changes have occurred, the actual patterns of changes and innovation within the farm sector have resulted in these indirect emissions being much lower than previously projected.

Recent studies of international agricultural land use trends show that that the primary land use change response of the world’s farmers from 2004 to 2012 has been to use available land resources more efficiently rather than to expand the amount of land used for farming. Instead of converting new land to production, farmers in Brazil, India and China have increased double cropping, expanded irrigation, reduced unharvested planted area, reduced fallow land and reduced temporary pasture. Much of the international attention on supply of corn for ethanol has focused on Brazil, where earlier estimates anticipated conversion of rainforests to commodity production. But between 2004 and 2012, at the same time U.S. corn ethanol production increased more than 200 percent, deforestation in Brazil’s Amazon decreased from 10,200 to 2,400 square miles per year.

Continuing to support adoption of these practices on farms will further reduce GHG emissions associated with agriculture—as well as benefiting the positive trends in lifecycle GHG balance of corn-based ethanol.

For a summary of the report findings see the USDA Factsheet: Lifecycle Greenhouse Gas Emissions of Corn-Based Ethanol. For more information on USDA’s Climate Change activities, or visit www.usda.gov/climatesolutions.