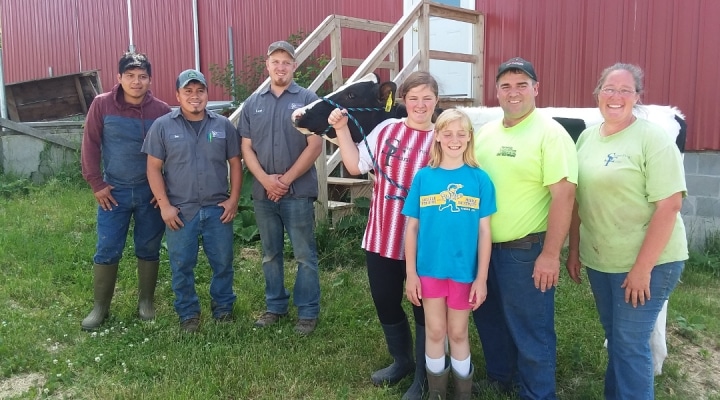 BRATTLEBORO, Vt. — STONE-FRONT LEADER HILDA, a 15-year-old Registered Holstein® cow, owned by Andrew Jay and Lynette E. Buttles of Lancaster, Wisconsin, has set the new record for the most Lifetime Milk produced by a Holstein. Hilda completed 2020 with a lifetime total of 460,720 pounds of milk.

With this new record, Hilda has surpassed the total of the previous Holstein record holder that was set in 2003 by KOEPKE K0017229-1660.  Known as the “Granny” cow, her lifetime milk total was 458,616.  Twenty-five years prior to that, the record was established in 1978 by Breezewood Patsy Bar Pontiac. Her final lifetime total was 425,769.

When asked what the keys were that enabled Hilda to produce more pounds of milk than any other cow in the history of the breed, Andy Buttles says part of it was Hilda’s good blend of production and type.

“She was a moderate sized cow with a great udder.” Andy said about Hilda. “She would just make big record after big record and do it easily.”

Hilda was classified EX-90 4E and her best record was set during her nine-year old lactation, where she completed 48,200 pounds of milk with three times a day milking. She also had 8 natural daughters during her lifetime.

The herd at Stone-Front Farm has an RHA of 30,058 pounds of milk with 1291 pounds of fat (4.30%) and 914 pounds of protein (3.04%). The Buttles have been milking Registered Holsteins since 1913, and concentrate on breeding well-balanced cows, providing exceptional cow comfort, and working as a team.

For many years, the Registered Holstein cow has been known as the most efficient producer of high-quality milk. Today, there’s no better example of tremendous longevity, productive life, and reproductive efficiency in a cow, of any breed, any place in the world than the Buttles’ Hilda cow!