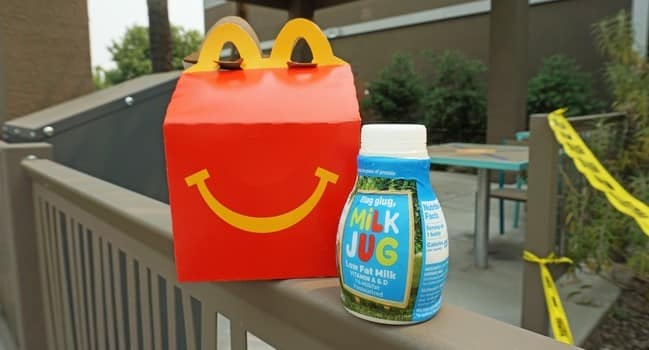 SACRAMENTO — At fast food and sit-down restaurants across California, kids’ meals come with water or milk automatically. At least, that should be the case since state law requires restaurants to offer the healthy beverages by default to reduce the amount of sugary beverages served to children.

California Senate Bill 1192, authored by Sen. Bill Monning (D-San Luis Obispo), went into effect Jan. 6, 2019, but research by the UC Nutrition Policy Institute (NPI) has found that implementation has not been universal and more can be done. The results, along with results from a similar study in Wilmington, Del., were published Aug. 20 on HealthyEatingResearch.org.

Before the law, 10% of menu boards observed by the researchers in California listed only the healthy beverages. Data collected after the law went into effect showed 66% of menu boards list the healthy default beverages. The researchers also collected data on the proportion of cashiers who verbally offered only healthy beverages with kids’ meals when orders were placed. This happened only 5% of the time before the law was enacted, and dropped to 1% after.

“Parents look at menu boards and kids look at menu boards, but it is likely that what the cashier says also influences which drink they choose,” said Lorrene Ritchie, NPI director and UC Cooperative Extension nutrition specialist. Ritchie was the lead researcher on the California portion of the study. “In our data collection, we would order a kids’ meal and wait for them to offer a drink. But mostly they said, ‘What drink do you want?’ instead of ‘Do you want water or milk with that?’”

The law doesn’t specify whether the cashier must offer the default beverages, but the spirit of the law suggests they should, as it would likely have a greater impact on the selections that children and parents make, Ritchie said.

According to Gail Woodward-Lopez, an NPI researcher and co-investigator on the study, most restaurant managers expressed support for the legislation, but didn’t know much about it.

“NPI in partnership with the California Department of Public Health is working with some local health departments to provide training and materials to help restaurants comply with the letter and spirit of the law,” Woodward-Lopez said. “Our next step is to measure whether this health department support is effective.”

The dire need to direct children away from sugary sodas is clear. Empty calories from soda and other sugar-sweetened beverages is the No. 1 cause of obesity in children, Ritchie said. Obese children are at least twice as likely as non-obese children to become obese adults. Obese children and adults are at greater risk for Type 2 diabetes, heart disease, stroke, high blood pressure, high cholesterol, certain cancers, asthma, low self-esteem, depression and other diseases. The Centers for Disease Control and Prevention names obesity as one of the conditions that increase risk of severe illness from COVID-19.

Many open questions remain, such as how drinks are portrayed on drive-thru signs and offered by drive-thru order takers. The COVID-19 pandemic has also altered the way Americans purchase food, with increased online ordering, delivery and drive-thru usage. In-store kiosk ordering is also growing in popularity.

“The role of default beverage policies in this context is important and not well understood,” Woodward-Lopez said.

Woodward-Lopez and Ritchie are working with colleagues around California and across the country to design follow-up studies of newer food technologies and beverage policies being passed elsewhere, to determine how government policies can protect children’s health by steering them toward healthy beverage consumption.

The newly published research was funded by the Robert Wood Johnson Foundation and by the California Department of Public Health with funding from the United States Department of Agriculture.