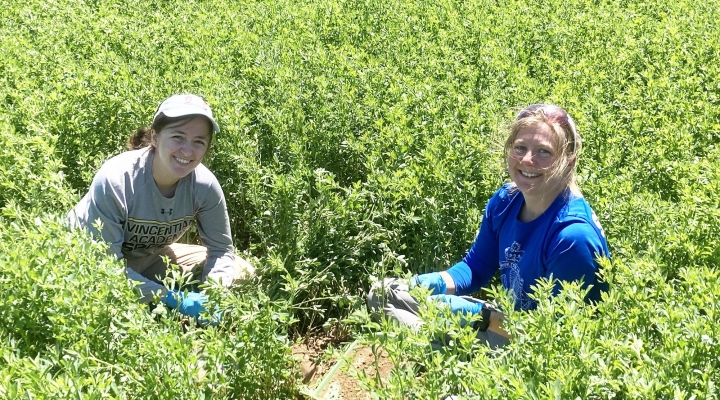 An assistant professor in Penn State’s College of Agricultural Sciences has received $950,000 in two competitive grants from the U.S. Department of Agriculture to lead a team studying interactions between plants and rhizobial soil bacteria, with the long-term goal of boosting forage and crop production while reducing environmental impacts of fertilizer use. (photo by Penn State University)

UNIVERSITY PARK, Pa. — An assistant professor in Penn State’s College of Agricultural Sciences has received $950,000 in two competitive grants from the U.S. Department of Agriculture to lead a team studying interactions between plants and rhizobial soil bacteria, with the long-term goal of boosting forage and crop production while reducing environmental impacts of fertilizer use.

Liana Burghardt, assistant professor in the Department of Plant Science, garnered a two-year, $300,000 award from USDA’s National Institute of Food and Agriculture to study rhizobial cycling between diverse legumes in crop rotations to understand the effects on soil and plant health. She also received a three-year, $650,000 USDA-NIFA grant to lay the groundwork to breed for “mutualisms” by tracking the long-term adaptation of nitrogen-fixing rhizobia in agricultural fields.

Mutualisms are the ecological interactions between organisms from which both organisms benefit. In this case, it is rhizobial soil bacteria and leguminous plants, Burghardt explained.

“Legumes establish beneficial associations with rhizobia that perform biological nitrogen fixation — providing nitrogen fertilizer to plants without the economic and greenhouse gas emission costs of chemical nitrogen inputs,” she said. “However, this mutualism is far from optimized in agricultural systems. Most seeds are coated with rhizobial bacteria prior to planting, but those inoculants often fail to survive or compete in agricultural soils.”

The rhizobial-cycling research is aimed at exploring the possibility of leveraging legume cover crops to enrich soil microbiomes for specific rhizobia communities that benefit cash crops and increase soil health, according to Burghardt. In particular, she noted, this proposal will test the hypothesis that rhizobial cycling and effective nitrogen-fixation depends on the specificity and degree of symbiotic partner overlap between cover crops and cash crops.

In the second project, Burghardt’s research group will use existing alfalfa variety trials to assess the ability of alfalfa to steer the evolution of mutualistic soil bacteria partners in the face of environmental variation. These trial plots, currently managed by Tyler Rice, research associate with Penn State Extension, have been planted yearly at Penn State’s Rock Springs and Manheim agricultural stations to provide yield information for agricultural companies.

The researchers will use these trial plantings to measure for the first time the extent and genomic basis of rhizobial adaptation to alfalfa varieties across seasons and years. By conducting paired multi- and single-strain greenhouse experiments using isolates from the field trials, the researchers will assess strain competition and plant nitrogen-fixing benefits to enable screening for alfalfa varieties’ ability to reward helpful rhizobia. This research is expected to benefit legume breeders by establishing a screening pipeline and to help organic and conventional growers by contributing to the selection of legume varieties.

Since arriving at State College two years ago, Burghardt has built a research team to enable these new research directions. Her lab manager, Regina Bledsoe, played an essential role in gathering the preliminary data to enable this USDA grant funding. Combined, the research projects will support two graduate students, a postdoctoral scholar and a research technician. The projects also will provide undergraduate students with applied research experience.

The work should be enlightening for everyone involved, Burghardt suggested.

“We really don’t know what’s happening to soil microbes in crop rotations, how rhizobial bacteria are influenced by individual cover crops and cover crop mixtures, or repeated exposure to alfalfa, so it will be fascinating to measure their response directly,” she said. “Ultimately, leveraging the power of host-microbiome manipulation to enrich specific populations may represent a novel, cost-effective avenue to promote efficient nitrogen-fixation. Doing so will support robust yields, improve soil health, and decrease chemical nitrogen inputs and greenhouse gas emissions.”