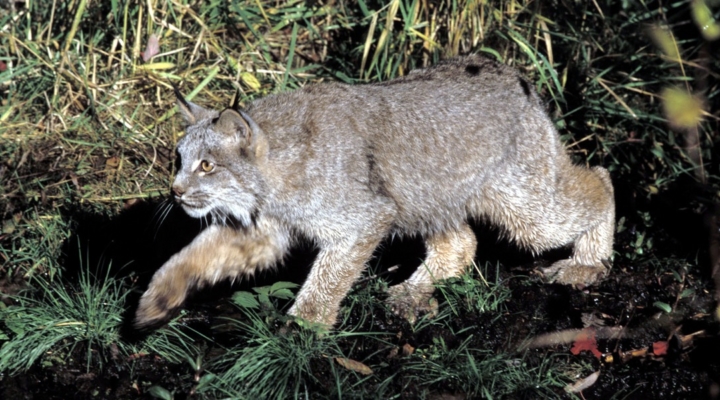 A Canada Lynx in the forest. (Credit: Erwin and Peggy Bauer/U.S. Fish and Wildlife Service)

DURHAM, N.H. — Scientists with the New Hampshire Veterinary Diagnostic Laboratory at the University of New Hampshire have discovered a previously undiagnosed parasite and virus in the Canada Lynx. The parasite, transmitted by ticks, is a known to infect domestic dogs. The virus is similar to the Epstein-Barr virus that causes mononucleosis in humans and is related to a virus that infects domestic cats.

The surprising findings were uncovered during a collaborative research study to establish a baseline of diseases affecting a seemingly healthy wildlife population, the Canada Lynx. By obtaining this information, scientists should be better able to recognize an emergence of new diseases in the wild population and monitor the state of these natural diseases within lynx populations over time.

Canada Lynx have been federally listed as threatened since 2000, and the only state in the Northeast with a resident breeding population is Maine. Recently, lynx have been observed in New Hampshire and Vermont, including female lynx with kittens, which suggests an expansion of their current habitat range.

Scientists primarily with the NH Veterinary Diagnostic Lab performed postmortem examinations on 38 Canada Lynx from the state of Maine Department of Inland Fisheries and Wildlife. The frozen carcasses of the animals were retained over 10 years and had been collected by wildlife biologists after having been found dead, with the most common cause of death being hit by a car. Data were collected during postmortems, and tissues were collected and examined microscopically. Additionally, other tissues were sent to collaborators for further infectious agent and nutritional testing.

Scientists found lungworm infection in 22 of 32 animals where the lung was examined. According to Stevens, it is unclear how much of an affect the presence of these parasites had on the health of the lynx. Many cases had minimal reaction associated with the infection so the parasites were likely incidental. However, other cases had more severe inflammation associated with the parasites, which may suggest some effect on the overall health of these individuals.

However, scientists also found inflammation in the heart and skeletal muscle of multiple Canada Lynx, and in two animals noted a microscopic protozoal organism suggestive of Hepatazoon sp.Additional diagnostic tests are being performed at the University of Georgia to definitively identify the protozoal species in these lynx. Protozoa are unicellular organisms, which occasionally lead to parasitic disease in different animal species.

“To our knowledge, the parasite we believe this to be has not been diagnosed this far north as it tends to infect animals in the southern states and has not been diagnosed in Canada Lynx, although they are often diagnosed in Bobcats in southern states. This parasite is transmitted by tick vectors and to this point, the range of these tick vectors is not described to be in Maine so it is unclear if the tick range has expanded into Maine or if the Hepatazoon-like organism in these lynx is one not normally found in North America,” Stevens said.

In collaboration with investigators at Western University in London, Ontario, Stevens and Needle also discovered a previously unknown virus in a subset of animals. This virus is similar to a gamma herpes virus recently identified in domestic cats, and is in the same family as Epstein-Barr virus, which causes mononucleosis and other diseases in humans. Stevens said it is unclear whether the virus is a causative agent of the disease in lynx.

“We are identifying infectious agents of importance to the wild lynx population, which could have impact throughout their range, and could impact other wild animals, and potentially domesticated animals. The finding of Hepatozoon-like organism was a surprise, as it has not been described previously this far north, or in this species. Hepatozoon is a known parasite of domestic dogs and is rarely a cause of disease in this geographic region, but if it is endemic in wild carnivores, then it may only be a matter of time before veterinarians start to seeing it affecting our own dogs,” Stevens said.

Going forward, Maine wildlife biologists will continue to collect tissues from Canada Lynx so that scientists can continue to monitor the overall health of the population and survey for new and emerging diseases.

Stevens will present the initial findings of this study at the 74th Northeast Fish and Wildlife Conference in Burlington, Vermont, April 17, 2018.

Founded in 1887, the New Hampshire Agricultural Experiment Station at the UNH College of Life Sciences and Agriculture is UNH’s original research center and an elemental component of New Hampshire’s land-grant university heritage and mission. We steward federal and state funding, including support from the USDA National Institute of Food and Agriculture, to provide unbiased and objective research concerning diverse aspects of sustainable agriculture and foods, aquaculture, forest management, and related wildlife, natural resources and rural community topics. We maintain the Woodman and Kingman agronomy and horticultural research farms, the Macfarlane Research Greenhouses, the Fairchild Dairy Teaching and Research Center, and the Organic Dairy Research Farm. Additional properties also provide forage, forests and woodlands in direct support to research, teaching, and outreach.