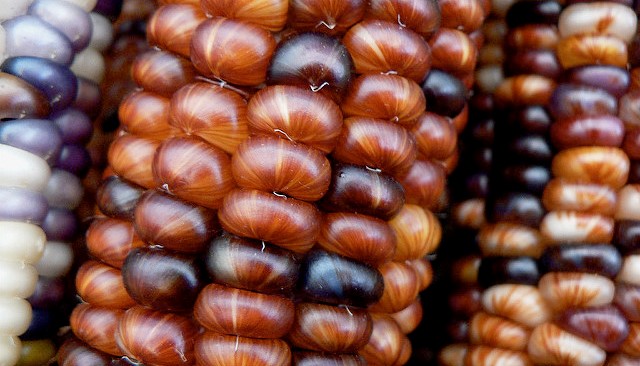 With the help of a new imaging machine developed at the University of Illinois breeders can learn the number of kernels per ear, plus a lot more information than can be manually observed. (Nadia Prigoda-Lee, Flickr/Creative Commons)

“If you take that same ear of corn into a lab, you can take the same approach but use an imaging system to get a more accurate measure of the total number of kernels,” says Tony Grift, lead scientist on the project. “But you can go a lot further than that. By pinning the ear on a spike and turning it automatically, we can present each row individually to a camera. This allows us to determine up to 16 morphological characteristics of each kernel, including kernel area, circumference, and circularity, a measure for how close the kernel shape is to a circle. We can also calculate the center of gravity and the location of the kernel on the ear, in fact we use these to make sure we don’t count kernels more than once.”

The imaging machine itself isn’t fancy. It’s more like a tabletop photography studio. A single halogen light is hung outside, above the box. The box itself is made from high-density polyethylene or HDPE, which is typically used to make cutting boards. This plastic adheres to virtually nothing (which is ideal for cutting boards) including glue, so it was assembled with bolts and fasteners.

Grift says the key is in the lighting. “Having a good camera is one thing, but light is very important. Light has to come from everywhere, so we channel light from the halogen bulb through a thin layer of the same HDPE material, which reflects off the side walls in which the cameras were mounted as well. Using the box is simple: You open the door, put the ear of corn on the spike, close the door, and a motor automatically rotates the ear as many times as needed to capture all rows. The motor and two cameras inside are controlled by a computer program that records the information.”

Grift says he’s been working with U of I maize breeder Martin Bohn since 2002 on perfecting imaging boxes. “We began working with roots, we called the box the Corn Root Imaging Box or CRIB,” Grift says. “Corn roots have an awkward shape which is difficult to capture. But we can calculate the stalk diameter, the root angle, and the fractal dimension, which is a way to describe a root’s complexity.”

He says that at some point, he and his colleague Abdul Momin realized that they could put anything inside the box and decided to experiment with an ear of corn.

Because an ear of corn is a natural object, the variations can make it difficult to image accurately. “It’s easier with ears that have very ‘well-behaved’ rows of kernels,” Grift says. “The rows on some ears of corn begin to spiral a bit, making it difficult to get an accurate reading without duplicating some kernels. Former students Wei Zhao and Yu Zhang made adjustments to allow for missing kernels, dead kernels, or some that were squeezed together or twisted, but overall, the imaging system works well.”

“This is where it gets really interesting,” Grift says. “All of the measurements mean very little to us. I like to joke that we agricultural engineers are just glorified technicians on the project. We just provide the numbers in spread sheets. The spread sheet then goes to Martin Bohn who creates a QTL map–quantitative trait loci map–that associates the particular characteristics of the kernel with the genes that control them.”

Martin Bohn, corn breeder and geneticist in the Department of Crop Sciences at U of I and co-author, notes that improved phenotyping methods, like the one this paper focuses on, are critical if we want to leverage genomic information in breeding and genetic research.

“Most plant characteristics that determine the agronomic potential of plants are highly complex,” says Bohn. “For example, a large number of genes, mostly with small effects, contribute to traits farmers are interested in, such as yield, efficient uptake and use of nutrients, tolerance to drought, heat, cold, etc. We can only hope to find these important but small effect genes if we can measure plant traits efficiently and accurately for a large number of plants, hence the term high-throughput phenotyping. The method we report here does not only provide the technology to do exactly this, but it might also be possible to go beyond this. Imagine, being able to determine the nutritional content of each kernel on the cob using our approach. We would love to expand this idea and work with companies to move on from manual, tedious field measurements to smart imaging techniques.”

The study, “Semi-automated, machine vision based maize kernel counting on the ear,” is published in Biosystems Engineering. The research was conducted by Tony Grift, Wei Zhao, Abdul Momin, Yu Zhang and Martin Bohn.

–University of Illinois
College of Agriculture, Consumer and Environmental Sciences
via EurekAlert!